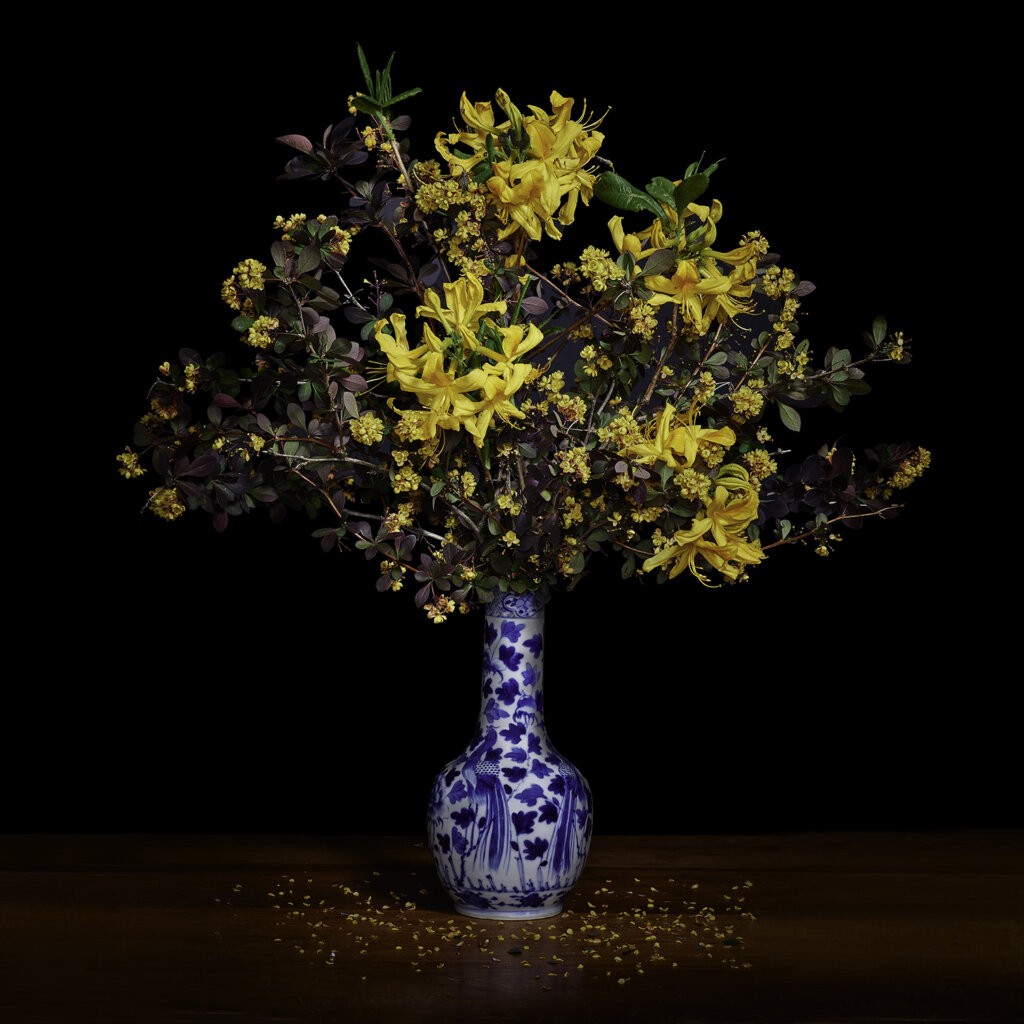 T.M. Glass researched the ways in which plants might “speak” and discovered a machine that translates a plant’s natural electromagnetic vibrations into sound via electrodes placed on the plant’s leaves. Bob Ezrin is a celebrated Canadian music producer and musician who has been inducted into the Canadian Music Hall of Fame and has worked with bands such as Lou Reed, Alice Cooper, Kiss, Pink Floyd, Deep Purple, and Peter Gabriel. In his recording studio, Ezrin jammed with music produced by a pansy plant, resulting in a composition titled Duet with Pansy. Overtop, Glass has created a surreal expression of the language of flowers with time-lapse images of flowers blooming.

If I had to trace back the catalyst for my photographic beginnings to a precise point in time, I would say it all started when I saw a painting by Claude Monet at the Art Gallery of Ontario in the late 1990s. It was a simple still life painting, lilac flowers in a jug, but the composition, light, shades and colors were so beautiful they captured my attention and my heart. I stayed looking at it for the longest time, and years later I can still remember how strongly that 100-year-old painting reached out to me. It was Monet’s artwork that inspired me to create a still-life picture of my own. Mine looked very different because I was using different artist tools, a photo camera and digital tools, but Monet’s spirit remains behind all my body of work.

Why did you move to digital?

Throughout art history, the availability of tools has had a great impact on the kind of art that could be produced, whether it was a lump of chalk in the hands of ancient cave painters, or oil paint on canvas. A pivotal moment was the 1960s introduction of a new artist tool: acrylic paint. Acrylic could create a hard line (if you had a roll of masking tape) and flat surfaces, things oil paint could not do. From that time contemporary art embraced flat imagery and hard edges, abandoning the illusion of depth which was something oil paint did better than acrylic. The exception was contemporary photography which continued to include the depiction of depth.
The introduction of digital art tools – cameras, software and printers – struck me as a moment just as important as the introduction of acrylic paint, and motivated me to start experimenting with them. Early printers had ink that changed colors after a week, but soon archival inks and papers arrived, along with printers that could deliver high-resolution images.
My first digital experiments included attempts to create still life pictures inspired by Monet. That’s when I discovered that digital software had all the tools needed to create paintings that included the illusion of depth. After 60 years of flatness, I decided that it was time for digital painting to bring a return to the illusion of depth. I then went forward in challenging other 60-year-old conventions of contemporary art including minimalism, simplicity, abstraction and the avoidance of beauty.
I fully embrace technology and use digital tools in my work to mix colors, collage bits and pieces of images, hand paint with digital paint, add and subtract. In other words, I do with digital hardware and software whatever I might do if I were using physical paint. Unlike a traditional painter, I create my art on a computer with input from a digital camera and a digital painting tablet and stylus. The created digital painting is then exported digitally from the computer to a digital printer. I do all the printing myself in my studio, with a six-foot Epson and on handmade archival rag paper imported from Italy.
But I’m not stopping here. In recent years I’ve started experimenting with other emerging technologies that can benefit art, such as 3D printing flowers or using an analog to digital machine to translate plants’ natural electromagnetic vibrations into sound and thus make flowers “speak”.

What inspired the creation of Plantasia, more specifically, where did you get the idea to use digital plant recordings in an audio video composition?

The central concept of the 19th century Arts and Crafts Movement, a quest for beauty quickened by a sense of approaching death, is perfectly epitomized in the flower, one of the most beautiful things on earth that, once cut, soon dies. The language of flowers is always present and speaks to us on the most important moments of our lives, at weddings, funerals, births, sick rooms, Valentine’s and Mother’s Day, in hotel lobbies, at political conventions and so on. Flowers can express so many varied emotions, such as love, loss, hope, congratulations or apologies.

About a year ago, in the middle of the night, I had a vivid dream in which I plants were able to communicate. I woke up with a jolt and the idea that I might find someone who invented equipment that interprets plant communications. I grabbed my Ipad, started a Google search, and was not surprised to find that such equipment did actually exist. The next day I was on a mission: to use the equipment to record plants in my garden. The equipment I found translated my plants’ biodata to midi music. The sounds gave me a powerful feeling of peaceful clarity that seemed to call for some way to share this wondrous experience. I called Bob Ezrin, producer of Pink Floyd’s The Wall who was hard at work in his Nashville studio, and asked if he’d like to collaborate with me on an art video. His reply was an enthusiastic “yes!!”
Bob tested the equipment I sent him on a variety of plants and fell in love with the music created by a pansy plant and recorded a duet between him on a keyboard and the pansy plant. He went on to compose a lush soundtrack around the duet. Working in my studio I took the music Bob sent and set about creating the visual component. I laid in time-lapse videos of flowers opening and animated those flowers so they could dance to Bob’s music.

Was the biodata taken from various plants significantly different? If so what did that suggest to you?

Yes, various plants differ in their biodata. A few weeks ago, I took care to record a wide variety of plants and trees. The sounds from a 300-year-old Red Oaktree were slow and deeply baritone. The sounds from a nearby Magnolia were quick, light and playful.

Will there be a sequel to Plantasia?

In the summer of 2020 I received a Canada Arts Council grant to work with the latest plant interface machines to capture local Canadian tree biodata. I am sharing this biodata with a number of young Canadian musicians and composers so as to create a new audio-video composition (or series of compositions) featuring original scores of music and advanced aerial videography.