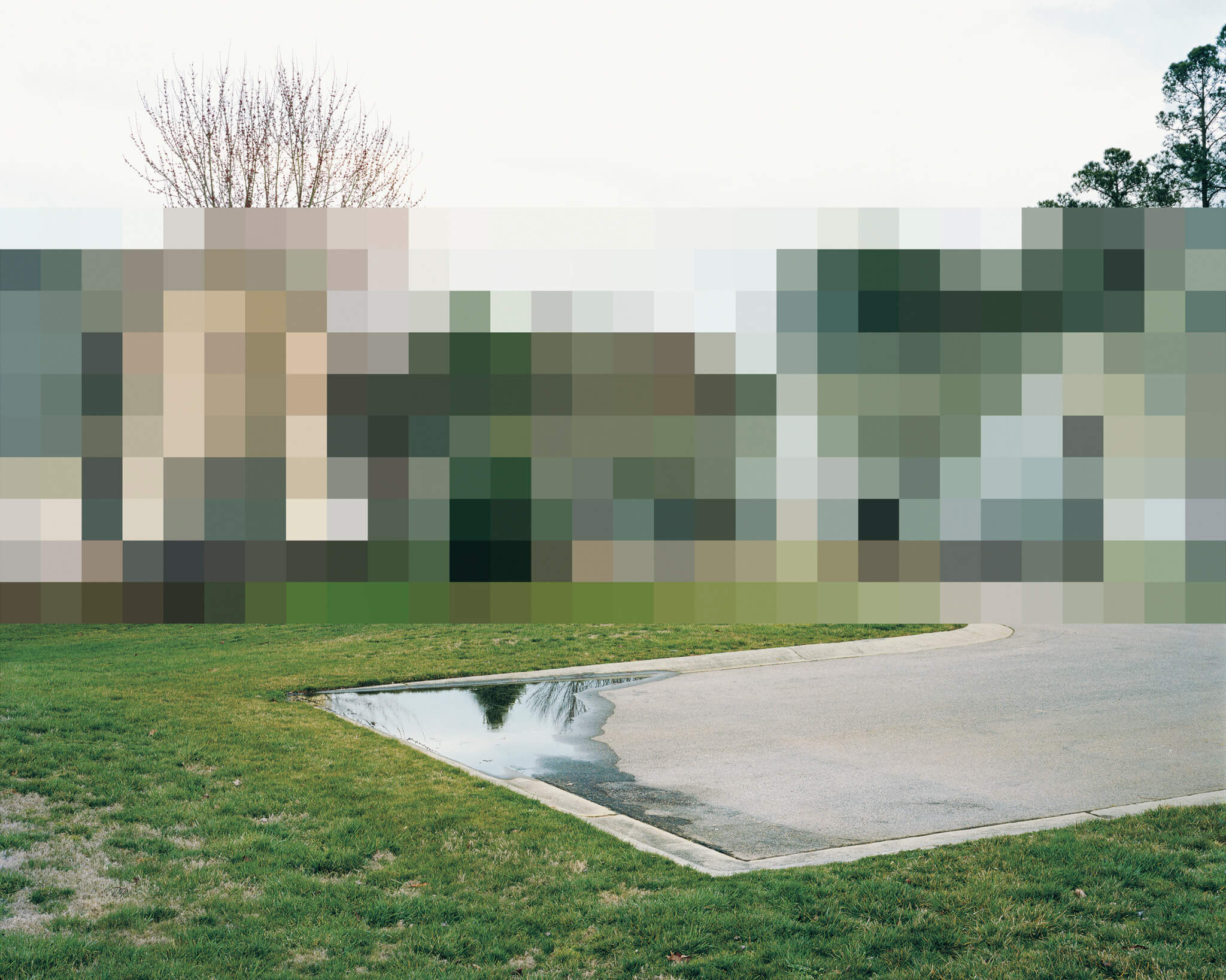 Redacted image of a complex of buildings where a pilot identified as having flown rendition flights lives, 2013, from the series Negative Publicity: Artefacts of Extraordinary Rendition

Join artist Edmund Clark as he discusses with Jonathan Watkins, Director of Ikon Gallery, his artistic practice, which combines a range of reference and forms including photography, video, found image, text and installation. Clark uses these mediums to explore the links between representation and politics.

He will discuss two recent exhibitions and series.

His current exhibition at the International Center of Photography Museum, New York entitled Edmund Clark: The Day the Music Died, presents an installation of works about the measures deemed necessary to protect citizens from the threat of international terrorism and the cultural, ethical and legal implications of these measures. Clark’s work around these subjects, including Guantanamo Bay and the CIA secret prison, engages with state censorship to explore unseen processes and experiences of control and incarceration in the so-called war on terror and the spectacle and representation of this conflict.

Clark will also discuss his series In Place of Hate which was recently on show at Ikon Gallery. The work is result of three years, to date, as artist in residence in HMP Grendon, Europe’s only entirely therapeutic prison. The exhibition comprised film, photography, installation and explores ideas of visibility, representation, trauma and self-image. These themes influence how prisoners and the criminal justice system are perceived by the public, politicians and media and are above all central to the experience of the men and staff engaged in the therapeutic process at Grendon. Clark’s work was shaped by these intense processes and experiences and by the environment of the prison. The exhibition is accompanied by two publications, an exhibition catalogue and an artist’s book.

Edmund Clark will be signing books after the talk. Here Press will be selling books for purchase using card or cash on the night. Books available for purchase are:
My Shadows Reflection (£25)
In Place of Hate (£15)
Negative Publicity (£65)
Control Order House (£20)
Mountains of Majeed (£27.50)

Edmund Clark is a British artist whose work incorporates photography, film, installation, found image, text and documentation to explore ideas of censorship, visibility and representation. He has published six books and been exhibited widely including in major solo museum exhibitions at the International Center of Photography Museum, New York, the Imperial War Museum, London, and Zephyr Raum für Fotografie, Reiss-Engelhorn-Museen, Mannheim. His work has been acquired for national and international collections including the ICP Museum and the George Eastman House Museum in America and the National Portrait Gallery, the Imperial War Museum and the National Media Museum in Great Britain. Awards include the Royal Photographic Society Hood Medal for outstanding photography for public service, the British Journal of Photography International Photography Award and, together with Crofton Black, an ICP Infinity Award and the inaugural Rencontres d’Arles Photo-Text Book Award. He was shortlisted for the Prix Pictet for the theme of Power. Edmund Clark teaches postgraduate students at the London College of Communication, part of University of the Arts London.

Jonathan Watkins has been Director of Ikon Gallery since 1999. Previously he worked for a number of years in London, as Curator of the Serpentine Gallery (1995-1997) and Director of Chisenhale Gallery (1990-1995).

He has curated a number of large international exhibitions including the Biennale of Sydney (1998), Facts of Life: Contemporary Japanese Art (Hayward Gallery, London 2001), Quotidiana (Castello di Rivoli, Turin 1999), Tate Triennial (2003), Shanghai Biennale (2006), Sharjah Biennial (2007), Negotiations (Today Art Museum, Beijing 2010) and the Guangzhou Triennial (2012). He was on the curatorial team for Europarte (Venice Biennale, 1997), Milano Europa 2000, (Palazzo di Triennale, Milan 2000), and Riwaq (Palestinian Biennial 2007). He curated the Iraqi Pavilion for the Venice Biennale in 2013 and Floating World, Bahrain in 2017 and has recently been appointed as curator of the Quebec City Biennial 2019.