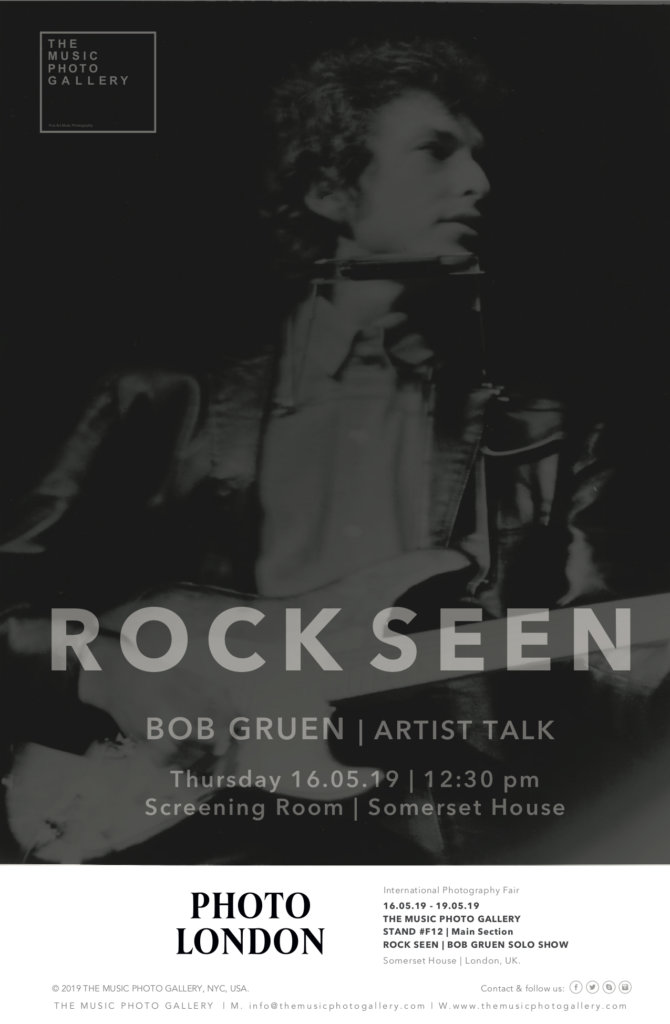 To coincide with their booth at Photo London, The Music Photo Gallery is hosting an artist talk by Bob Gruen. There will be screenings of Rock and Roll Exposed, a documentary by Don Letts about Bob Gruen featuring interviews with Iggy Pop, Yoko Ono, Debbie Harry and Alice Cooper and many others. There will also be screenings of All Dolled Up, a documentary made by Bob Gruen and Nadya Beck of their early 1970’s video footage of the New York Dolls and an early 1970’s documentary video of Ike and Tina Turner on stage and at home.

Bob Gruen, born in New York in 1945, is one of the most respected and well-known photographers in rock and roll. He has captured the music scene for forty years in photographs that have gained worldwide recognition. He began photographing rock stars with Bob Dylan and served as John Lennon’s personal photographer during his time in New York City.  As chief photographer for Rock Scene Magazine in the 70s, Bob specialized in behind the scenes photo features. He toured extensive with major rock acts such as Led Zeppelin, The Who, David Bowie, Tina Turner, Elton John, Aerosmith, Kiss and Alice Cooper as well as with the emerging punk and new wave bands including the New York Dolls, Sex Pistols, Clash, Ramones, Patti Smith Group and Blondie. As an active freelancer for other magazines like Cream, Melody Maker and Rolling Stone among others,  Bob’s photographs have appeared on the covers and filled the pages of many of these seminal publications capturing the whole scene; on stage, offstage, on tour, at parties, at play, at home and relaxing. His unassuming behind-the-lens figure embedded himself with rock bands so deeply that in some cases he was regarded as a virtual member.

Fair tickets are required to attend this talk