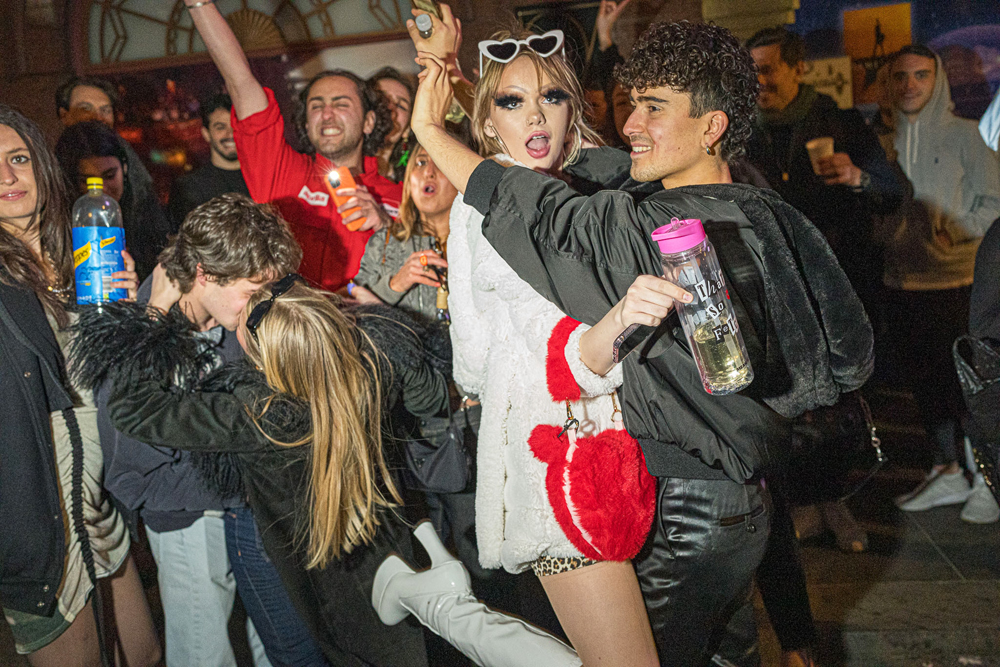 Since the start of the Covid-19 Pandemic, Dougie Wallace has been out photographing on the streets of London, capturing the changing moods of the city and its population. Through his distinct and direct style of expressive social documentary photography, he has depicted how the nation’s capital was initially crippled by the pandemic during lockdown and has since begun to recover as life returns to the bars and restaurants of the city. His work explores the social consequences of Covid with images of ordinary folk going about their lives in the most peculiar of circumstances. It is a testament to these strange and turbulent times.

Scottish photographer Dougie Wallace is internationally recognised for his long-term social documentary projects and his distinct and direct style of expressive street photography. He has won prestigious awards and exhibited as a solo artist and in joint exhibitions in many world-renowned institutions and photographic festivals. He has also authored several critically acclaimed books. London-based, his assignments and personal work take him around the world. In 2017, BBC4 broadcast a 30-minute programme about Dougie, as part of the  What Artists Do All Day series, providing insights into the lives of outstanding artists. The programme followed Dougie on the streets of Knightsbridge, as he completed the photographs for the book Harrodsburg. In 2019, Dougie was commissioned by Sky Art 50 to create a film, which explored what it meant to be British in the light of the EU referendum. It was showcased at The BALTIC Centre for Contemporary Art and at the Barbican. It was also broadcast on Sky Arts channel on the night of the original Brexit leaving date (March 29th, 2019).

Before establishing his publishing house in 1994, Dewi Lewis was the founding Director of two arts centres The Met in Bury and Cornerhouse (now HOME) in Manchester. In 1987 he established Cornerhouse Publications which achieved recognition internationally for its ambitious and imaginative publishing programme and was a winner of the Sunday Times Award for Small Publisher of the Year. Since 1994 many of the titles published by Dewi Lewis have been shortlisted for a range of international prizes and several have won major awards.Dewi was appointed an Honorary Fellow of the Royal Photographic Society in 2004 and in 2009 he was awarded the inaugural Royal Photographic Society Award for Outstanding Services to Photography. He was awarded the Kraszna-Krausz Foundation Award for Outstanding Contribution to Publishing at the World Photography Awards in 2012. In 2018 Dewi Lewis Publishing won both the Paris Photo / Aperture Foundation Photobook of The Year Award and the Rencontres d’Arles Author Book Prize for two different titles.