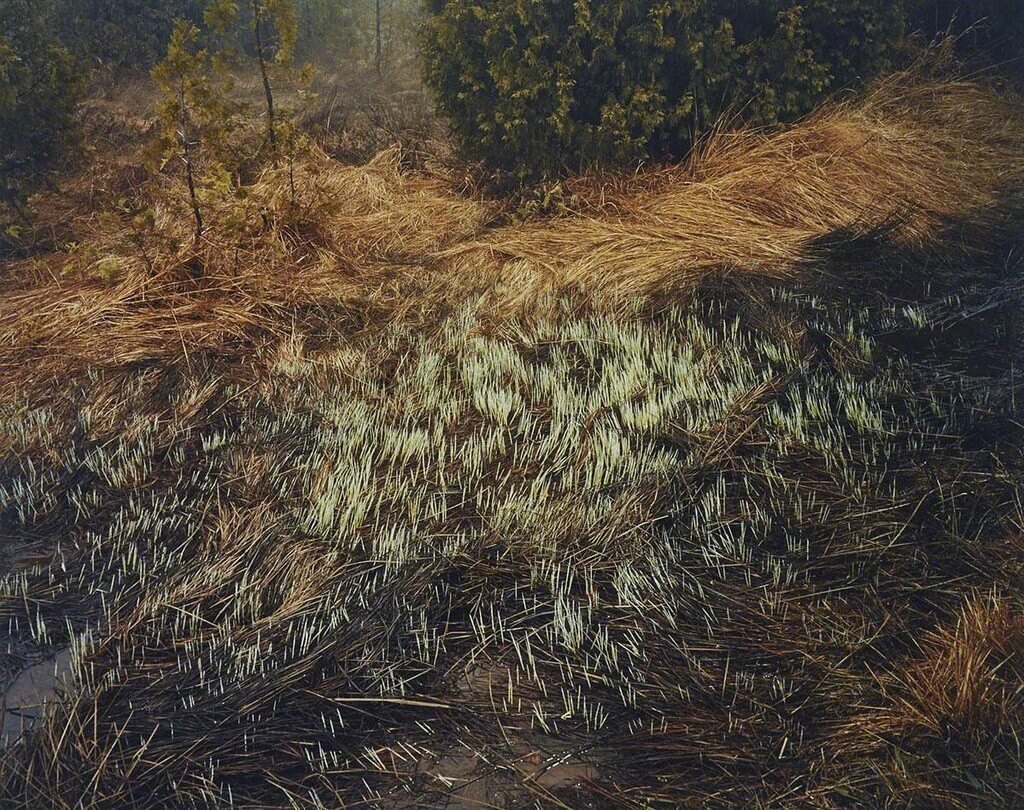 On the event of the exhibition David Milne: Modern Painting, running at London’s Dulwich Picture Gallery from 14 February – 7 May 2018, fellow Canadian artist and Photo London Master of Photography 2018 Edward Burtynsky discussed with exhibition co-curator Sarah Milroy the extraordinary legacy of Milne’s work and the relationship between the painter’s pictures and Burtynsky’s early photographs.

SM Mining has been such a consistent interest of yours as a photographer. How did your own relationship to that industry begin?

EB Just before I started out as an art student here in Toronto, I needed to get some money together to buy equipment and so on. A friend of mine worked up at the mine at Red Lake, which is literally the end of the road in Ontario, north of Dryden, on the border of Manitoba—about a twenty-hour drive northwest from Toronto. The first week up there, I found a job in the Red Lake Gold Mine, which for a long time was Canada’s richest gold mine. My friend worked at the Griffith Mine in Ear Falls in a big open-pit iron-ore mine, so I went to see him too. I was, I think, 19 when I saw that first big open-pit mine.

I was there at the end of the day, when they were doing a blast. Rocks were flying up in the air, and then they just rained down. The earth shakes because these are massive explosions taking off a whole bank at a time. The team might spend two weeks loading up a wall of rock with dynamite. It was an incredible thing to see, but I just filed it away and never really thought about it. I made quite a bit of money that summer, and I came back and started my photography course. It never occurred to me that it would become subject matter.

Later, in 1981, I was working on my last year’s portfolio. I had been doing a lot of horizonless work, looking at the landscape more as a raw material that I could use the way a painter would. In a picture like Grasses, Bruce Peninsula, Ontario, 1981 (p. 150) I was interested in the compression of space, looking at it from a painterly aesthetic, trying to fill my frame. There’s a sense of Pollock, I think, of something gestural, an all-overness. But I realised that I was just not that engaged with the subject matter itself. It was largely a formal exercise, and it seemed to suggest a yearning to be of another time.

About then I came across mined areas in Pennsylvania. That was the first time I shot a mine as a subject. It seemed more in keeping with my own moment in history. I had an intuition that if I kept working with these kinds of images I could come to understand our relationship to nature, how we use it, how we usurp it. To me that was more interesting. In 1982 also [the German photo-conceptual artists] Bernd and Hilla Becher came to North America, and they were shooting makeshift headframes [structural frames above mineshafts] in the mining country in Virginia. These are the only other photographers that I knew who were dealing with this kind of subject matter back then.

SM So many of the mines that you have documented have been on an almost epic scale. Milne’s paintings look back to an earlier, smaller scale of operation.

EB These are artisanal human-scale mines that Milne was looking at. I have been to Temagami, and I’ve also seen prospect holes in the woods. They were known in the industry at the time as ‘glory holes’—a guy takes all of his possessions, cashes out everything and goes out into the wilderness with dynamite, a pick axe and a shovel and on a hunch stakes out a place and says, ‘There’s gold here.’ There are hundreds and hundreds of these ‘lost lives’, I call them, where the hope was of hitting the jackpot. The sites are all grown over now, but I find myself thinking about that person’s life and what he had to give up to do this. How alone was it, out there digging away by himself? Did he leave a family back home? Each one of these holes has a human story attached to it. In a way, mining is a fascinating metaphor for life: you’re not sure the gold is there but you just keep toiling away.

SM Well, that’s very much the stage of life that Milne was at when he made these pictures at Temagami, in northern Ontario. He had just returned to Canada after 26 years in the USA, he was living in a tent, not certain anyone would ever care about the work that he was doing. He had no prospects.

EB There’s that, but if I had to project what he might have been thinking about here, it’s also an encounter with the human mark within a largely repetitious environment. You go over every hillock of the Canadian Shield and one place looks very much like the next. It’s fairly monotonous. But here was a human incursion. It adds that element to the landscape, an event.

SM These paintings are very raw and gritty. When you look at them, do you see any evidence that he saw this mining activity in a negative light?

EB At the time, Canada was just endless resource, forest from sea to sea, and we were still a very small population, just ten million people across the whole country. The notion that we were tipping the scales against nature was not on anybody’s mind. The fact that we could annihilate each other was certainly on a lot of people’s minds, after World War I, but that we were a species that would have a planetary impact? No. [The Canadian photographer] Michael Torosian once referred to the idea of ‘residual landscapes’, showing the traces that we leave behind. There’s something of that residual landscape in these paintings by Milne, but in its infancy.

SM Milne wrote to H.O. McCurry, the director of the National Gallery, about painting a prospect shaft, saying that it ‘looks like the collision between Winsor & Newton’s and a coal mine, good for painting’. These were evidently iron mines, but Milne described them as ‘iron, copper, silver, gold, arsenic, sulphur, molasses’.1 What about the colours here?

EB When I work with these kinds of landscapes, it’s often about the colours. Where minerals are found, there are usually a lot of traces of them in the water. Most ore bodies are the result of some ancient catastrophic event, where a meteorite hit the planet. The whole Sudbury basin was the site of a meteorite impact, so all the mines are around the edges where the magma gushed out. Hudson Bay was created by a meteorite impact. What happens when you have that high level of mineralisation and you start removing rock—that rock that has been sitting underground, benign—is that now you have broken it up, exposed it to oxygen and other gases and water, so these sulphurs and coppers, which might give you a green colour, and iron ore and all these other chemicals are being released into the environment. That’s how you get the weird coloured pools, like the ones that Milne painted. You don’t normally find these colours in nature. In our current time, you find them only when you get that intersection with us. 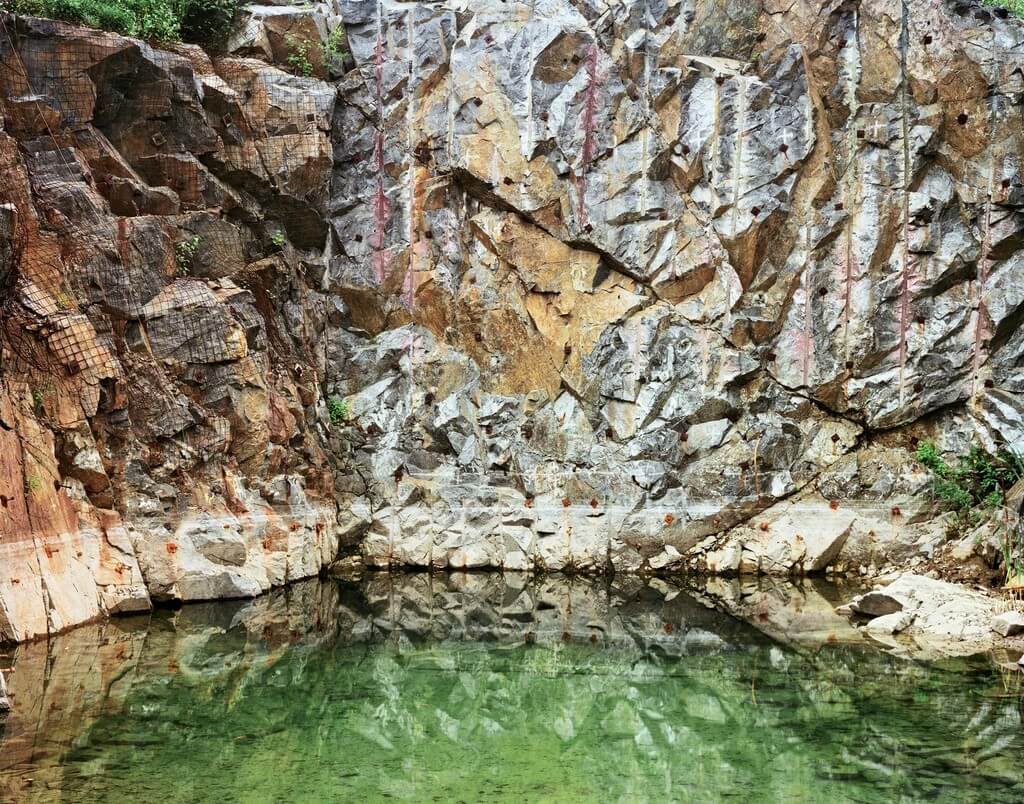 SM Tell me about your photograph Abandoned Mine Shaft Crean Hill Mine, Sudbury, Ontario, 1984 (above). You said it was one of your most important earlier works.

EB I almost didn’t get that shot. I was walking by it and saw it, but it was in deep shadow. But then I went back and had the idea of using a very long exposure to get that colour. They had been mining there for nickel and copper—all the mines in Sudbury are fifty-fifty nickel and copper. It’s all here in this image: the compression of space, the flattening of the image. I felt a recognition that visual interest can be cultivated from multifaceted rock when the rock face is exposed.

SM It strikes me how much this image is structured like Milne’s Flooded Prospect Shaft II, 1929 (below), which we are showing in the exhibition.

EB In both pictures, there is a bifurcation of the foreground and the background. In both cases, we are looking at an altered rock face. There is a dynamic that begins to unfold. To me it’s important to the image that you can see the reflection in the visual field below. Then there are those fantastic greens. This is the painting of Milne’s that really grabs me. 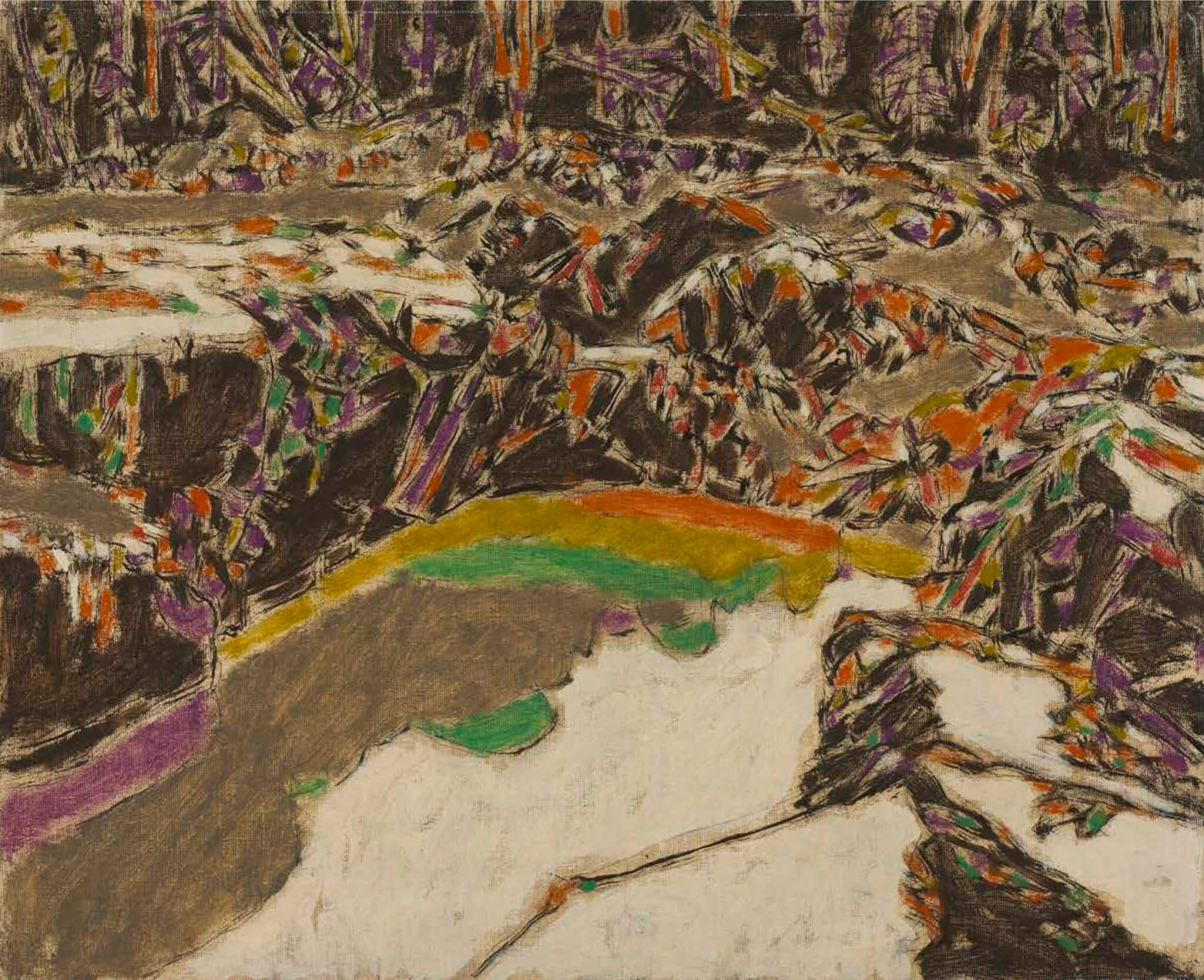 SM What about the composition of these two pictures?

EB Well, it’s kind of like short-wave radio, attending to a very, very faint frequency, and that delicate moment when you find it. It’s elusive. My camera could have been 8 inches to the right, or 8 inches to the left and the picture would have fallen apart. That ability to dial in is the key. I often tend not to include sky in my compositions, because I want the eye to wander over the whole plane. Maybe for me, initially, this has something to do with the particularities of this place, of this landscape in Ontario. Everything visual is happening down on the ground.

SM Do you see these as very Canadian pictures?

EB We have a reputation in Canada of being closer to nature because we have so much of it, and many of us have had the experience of being out there in the presence of what nature intended. Our experience of nature is therefore different from that of people who grew up in Holland, where every plant and every tree has been placed. We still have untouched nature but, for a smallish country population-wise, we have done a very aggressive job of removing the forests. We are prodigious takers. Fort McMurray is the largest surface-mining project on the planet. We are the leading mining and drilling country in the world, owning and operating more than half of all mining operations internationally, from South America to Africa to Asia.

As a subject for art, though—this is not normally something that an artist would pursue. I mean, [the American landscape photographer] Carleton Watkins did some early works, but he was often hired by the mining companies back at the end of the nineteenth century. At around the same time, [the Scottish-Canadian photographer] William Notman and his studios were hired to shoot the building of the railway as well, and then there was [the American] Darius Kinsey with his logging pictures—these are all early examples of industrial photography; there is this history. But in this case, Milne’s interest was strictly voluntary, documenting the mineshafts as a kind of relief from the monotony of the landscape.

SM Just one visual prospector, maybe, meeting up with another, looking for some gold.

EB You could say that, for sure 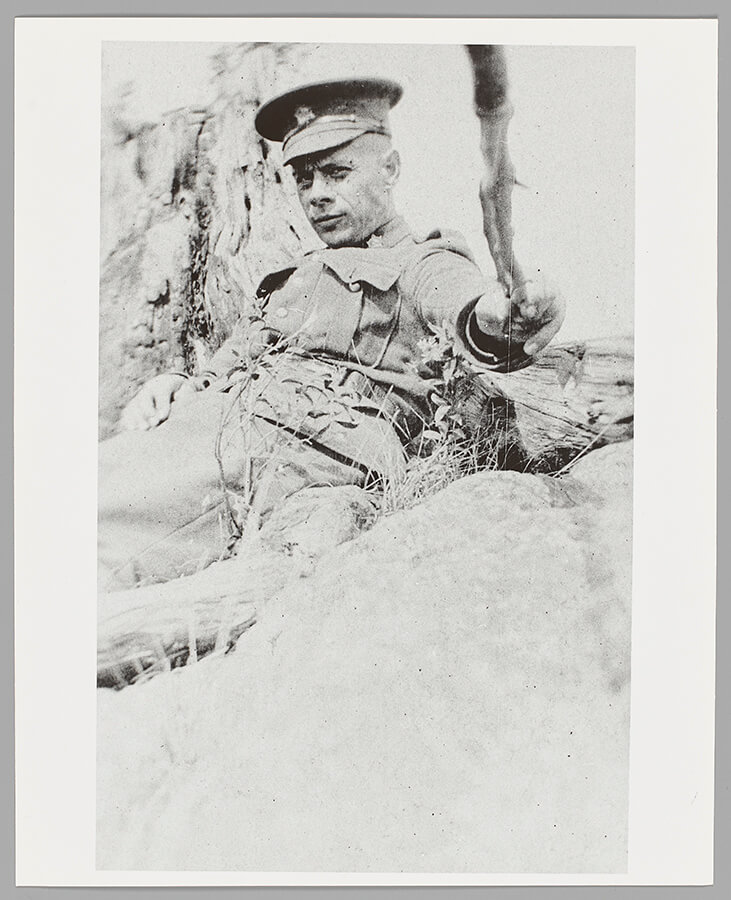 Re-published with permission from the catalogue for:

Dulwich Picture Gallery presents a major exhibition of one of Canada’s greatest modern painters, David Milne (1882-1953). It will showcase, for the first time in the UK, a wide selection of his oil paintings alongside watercolours, drawings and photographs, to reveal an artist of true originality and vision. Through periods of intense experimentation, often working in solitude in the wild, Milne developed an extraordinary body of landscapes, fusing influences from Monet, Matisse and Cezanne into a bold modernist language of his own.

Edward Burtynksy will be speaking at Photo London Talks on Thursday 17 May 2018. Book your ticket for this event here.