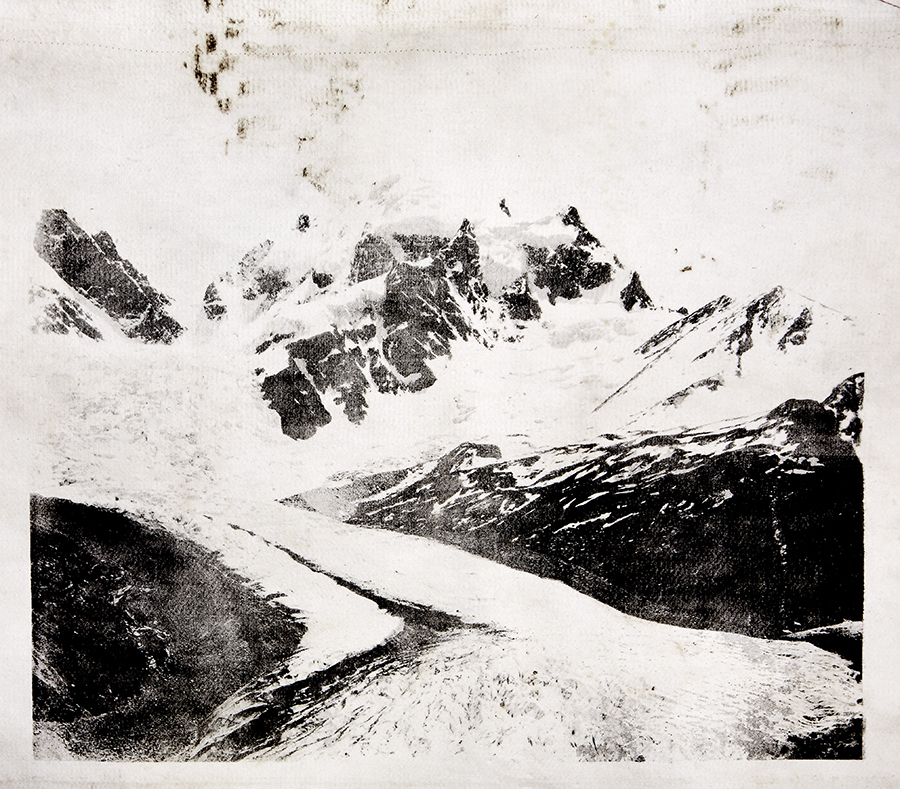 Bildhalle presents artist Douglas Mandry in conversation with Eugénie Shinkle, Reader in Photography School of Media, Art and Design University of Westminster. There will be a Q&A at the end of the live conversation.

Douglas Mandry won the prestigious ‘Foam Talent Award 2020’ it for his series ‘Monuments’, presented by Bildhalle at Photo London Digital. The series reflects a relationship between technological evolution and climate change. Collecting images of glaciers taken in the early 20th century, Douglas Mandry transferred them onto actual pieces of geotextile, which have themselves been brought down from the Alps after a season on the ice. Through the antique process of lithography, a double-exposure phenomenon occurs: the images, fading memories of the golden age in Switzerland‘s tourism, become a part of the today’s technological attempts to preserve the past which no longer exists.

Meanwhile, Douglas Mandry travelled deep into the Swiss Alps, collecting pieces of ice protected by man-made geotextile fabrics. The blocks of ice are inserted in a self-made large format camera containing photosensitive colour paper. Using specific aperture shutters pierced in the wooden camera, the light is conducted through the ice directly onto the paper. As an outcome, a trace of the melting ice left on the paper is developed in a dark room sometimes several days later. Thereby the process of disappearance is recorded photographically.

Douglas Mandry (*1989, CH) is an artist who lives and works in Zurich. He gained a Bachelors in both Visual Communication and Photography from the University of Art and Design ECAL in Lausanne. Since graduating Mandry has been nominated for numerous awards including the Paul Huf Award, Swiss Federal Design Award and got awarded as «Foam Talent 2020». His work has been shown in international venues including Photo London, Photo Basel, Unseen Photo Fair, Foam Museum Amsterdam or Kunstmuseum Wien. Bildhalle dedicated two solo shows in 2016 and 2018 to his work, a next solo show is planned in November 2020. Mandry’s practice is a direct response to the digitalization of photography and the technological accelerations that came along with it. Always shooting his initial images in analogue, all of Mandry’s interventions in the image are done by hand, through the application of different historic photographic processes or by physically cutting and pasting. «Seductively beautiful in the use of colour, the diversity of form and the choice of materials while, simultaneously, being conceptually sophisticated in terms of subject-matters and photographic processes: the starting points for the artist Douglas Mandry (b. 1989 in Geneva), who has moved to Zurich in 2013, are real-world phenomena and experimenting with various photographic techniques. Oscillating between historical analogue and contemporary digital imaging methods, the artist creates his very own pictorial worlds. Observations in nature and the examination of current issues merge in his work with his reflections regarding his chosen medium photography – documentation with abstraction, reasoning with sensuality. Conceptual rigour and experimental liberties are well balanced in Douglas Mandry’s work, and the autonomous nature of photographic processes bears serendipitous results: the unforeseen meets intention and idea. This way, complex issues receive poetic allure. Each work retains a productive riddle that encourages us to question our perception of the reality of the world and the reality of images.» By Nadine Olonetzky

Eugenie Shinkle is a photographer and writer. Originally trained as a civil engineer, her work engages with a variety of media including painting, photography, music, and digital games. She is the co-founding editor of photography platform c4journal, and has also contributed to a range of publications including the Art Journal, The Journal of Architecture, 1000 Words, Source, American Suburb X and Foam. Shinkle is Reader in Photography at the University of Westminster in London, England.