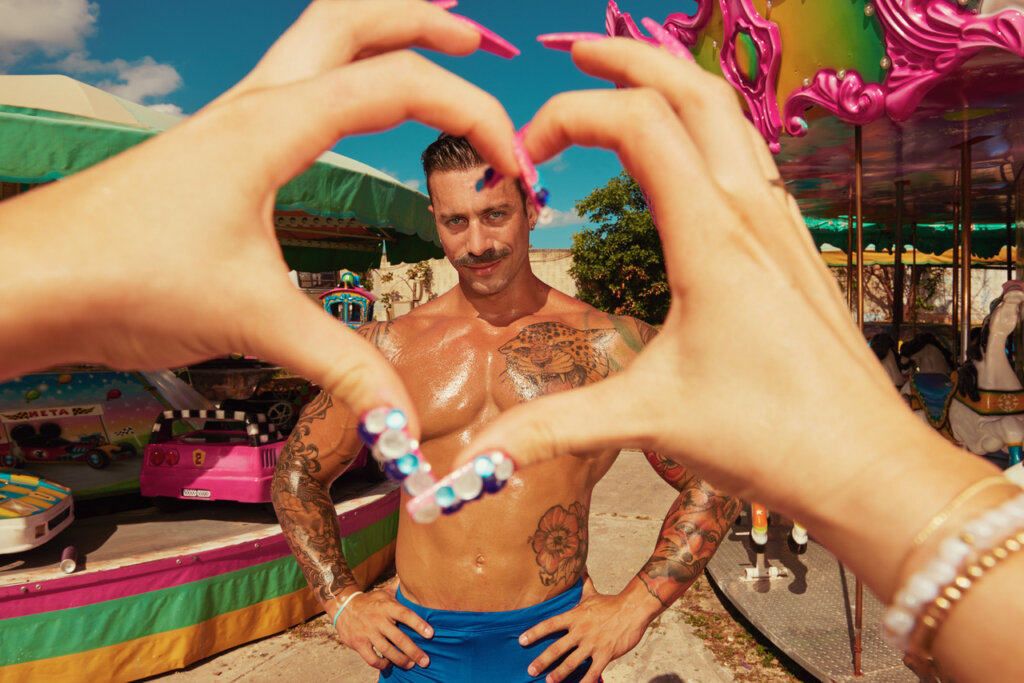 Vanessa Ansa talks to photographer Kourtney Roy about her life and work, to get behind what inspires her bold, quirky and retro cinematic aesthetic – the distinctive signature which runs through her oeuvre.

They will talk about the mise-en-scènes Kourtney creates in her photographs, which often make us feel like we are looking at film stills, and where she juxtaposes the banal quotidian with the absurd, casting herself as the main protagonist in a slightly mysterious but humorous and off-kilter world.

Having published a number of books which invariably transport us into some imagined narrative being played out by the characters frozen in Kourtney scenes, she is about to release her latest one – The Tourist – which comes out this month! Tune in for a chance to hear the artist talk about this witty, colourful, trashy and at times faintly sinister new body of work.

This talk is presented in partnership with Hundred Heroines.

Kourtney Roy was born in the wilds of Northern Ontario, Canada. She was raised by a family of lumberjacks and spent her youth trapping and taming wolves. She learned to use an axe before she learned to walk and had mastered the use of her father’s rifle and other small firearms by the age of twelve. After having spent a rather raucous youth drinking and bar fighting, she turned her gaze towards Europe, eventually settling in Paris. Roy’s studies in photography, at Emily Carr University of Art and Design in Vancouver and later at the Ecole Nationale Supérieure des Beaux-Arts in Paris, inspired her to develop her finicky aesthetic, which lends itself particularly well to glossy paper. Instilled with a dark sense of humor, taking their clues as much from the grotesque nature of seemingly placid settings as from the tensions simmering just under the surface, her photographs have garnered many prizes, including the Prix Picto in 2007, The Emily Award in Canada in 2012 and the Prix Carte Blanche PMU/Le Bal in 2013 and the Pernod Ricard Carte Blanche in 2018. Recently she expanded her practice into the realm of film making. In 2019 she won best experimental film at the Brest European Short Film Festival with her dark and dreamy film, “Morning, Vegas”. Roy’s work has been exhibited widely in France, but also abroad. She has been seen at the Planche(s) Contact Festival in Deauville in 2012, The Portraits Festival in Vichy in 2015 and at Le Bal in 2014 and a solo show at Paris photo in 2018, among other events and venues. Internationally Roy’s photographs have been featured at exhibitions in China, as well as Italy, Switzerland, Australia (at the Head on Photo Festival in Sydney in 2013) and at the Moscow Photo Biennale in 2017. Roy has also released several publications on her work including an accompanying artist book to Le Bal’s exhibition “Ils pensent déjà que je suis folle” and an artist’s book “Enter as Fiction”, both published by Filigrane Editions, as well as “Northern Noir” published by Editions La Pionnière, “California” by Editions Louis Vuitton and her latest book, “The Tourist” will be released at the end of October 2020.

Vanessa Ansa, Projects Manager at Hundred Heroines, recently transitioned from being a secondary school teacher to being a bright-eyed and bushy-tailed student at Birkbeck, where she completed an MA History of Art in 2019. Whilst studying, she maintained links with teaching in her role as Project Officer for an outreach programme run by Birkbeck School of Arts, and as teaching assistant for Art History Link Up, a charity devoted to providing A level Art History courses for students at state-maintained schools, who wouldn’t otherwise have access to reading Art History. One highlight of the MA for Vanessa was working at Iniva on placement. This radical and nurturing organisation focuses on creating a visual arts programme which speaks to the wide-ranging social and political consequences of globalisation, their work centred on British-born and British-based artists of African and Asian descent. Being at Iniva, and spending time in their Stuart Hall Library, resonated very strongly with Vanessa’s own interests and cultural concerns. During this time, she also co-led a Decolonising Narratives reading group across campuses at UAL. Vanessa’s role at Hundred Heroines has evolved since her time with the organisation, encompassing exhibition coordination and more recently, steering the development of the didactic components of the Hundred Heroines programme. Working with Hundred Heroines allows Vanessa to continue learning and, importantly, to contribute her energies towards creating spaces where audiences can connect with the visual arts and benefit from their inherent educational, intellectual and affecting qualities.