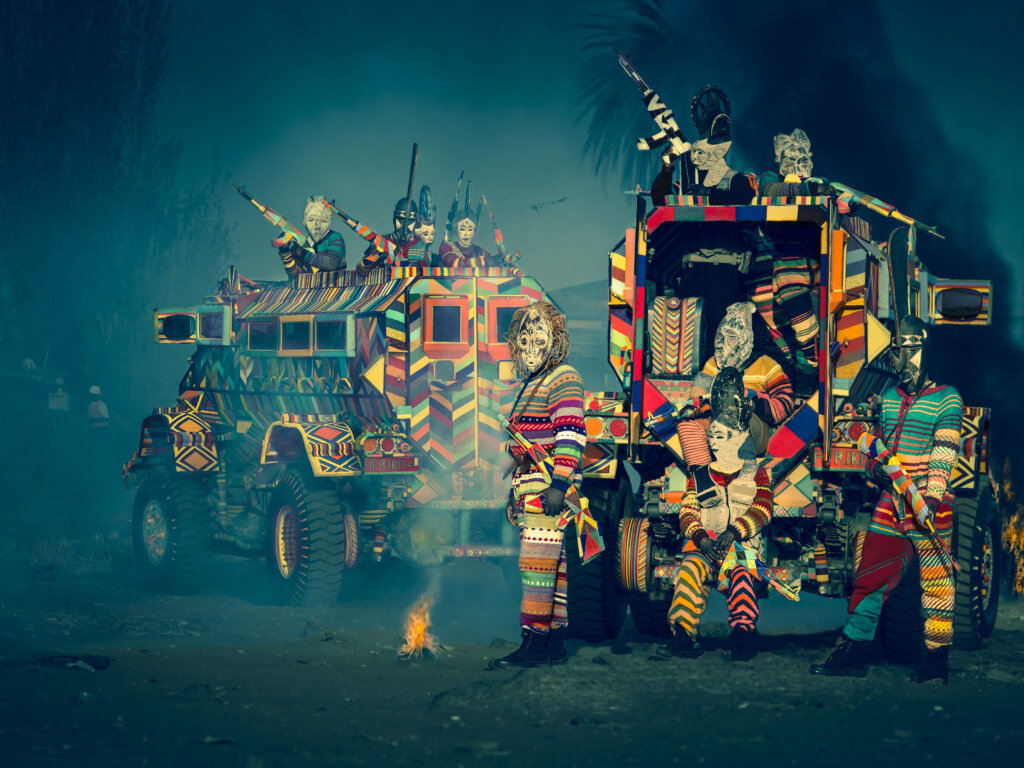 Ralph Ziman, Riot Squad Arrives on The Scene in Their Armoured Vehicles, C-print on Kodak Endura Paper, 40 in x 59.5 in [102 cm x 151 cm], Edition of 5. Courtesy of The Rendon Gallery and the artist.

Join South African film director and artist Ralph Ziman in his studio as he discusses ‘The Casspir Project’ with British television executive and presenter Alan Yentob. The tour will offer the chance to closely observe SPOEK 1, the 11-ton decommissioned, apartheid-era Casspir vehicle that has been decorated with approximately 70 million glass beads, central to Ziman’s The Casspir Project and after which it is named. During the apartheid era, the Casspirs were used extensively against black civilian populations. They became synonymous with violence, police intimidation and institutional oppression. ‘The Casspir Project’ repurposes this and other symbols of violence into vibrant, beaded works of art collectively realised by African craftspeople. The work invites the viewers to reflect how cultural memory – often entangled with violence – may bear upon us.

The Rendon Gallery presents works from ‘The Casspir Project’ at Photo London Digital.

Alan Yentob is a British television executive and presenter who was, until recently, Creative Director of the BBC. Having distinguished himself as an outstanding programme maker at a young age, he went on to hold most of the senior leadership roles at the BBC. In the past decade he was both Creative Director, and Editor and Presenter of the arts show ‘Imagine’. As Creative Director, Alan was responsible for overseeing the BBC’s creative strategy and its implementation across all content and services; he was also the focal point for talent management across the whole of the BBC. Alan stepped down from the role of Creative Director in December 2015. Alan has honorary fellowships of the Royal College of Art, the BFI and the Royal Institute of British Architects and is a fellow of the Royal Society of Arts. He is Doctor of Letters at Leeds University and at De Montfort University. In 2015 he was honoured by the Media Society for his contribution to British culture.