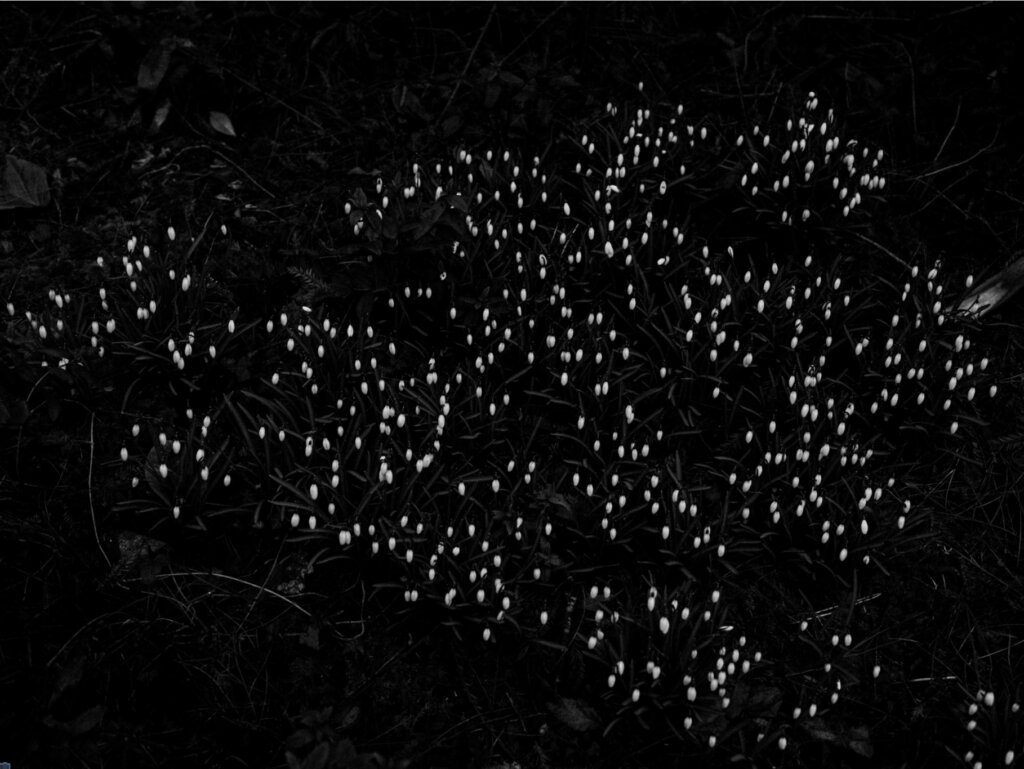 In 2016 Robbie Lawrence travelled to a remote stretch of coastline in the west coast of Scotland, to Linn Gardens, which lies at the head of Cove Bay on the west side of Rosneath peninsula. The gardens had been run for fifty years by Jim Taggart, an avid botanist and gardener.

Jim discovered that the region’s subtropical climate allowed him to grow plants and flowers from all over the world. His endeavours led to the estate being covered in an intricately plotted web of ferns, bamboos, Magnolias and Rhododendrons. As Jim got older, his son Jamie took over the more physical elements of maintaining the garden, including travelling abroad to research and gather new plants. On one such journey, to the northern mountainous region of Vietnam, Jamie disappeared. His body was found years later, he had evidently fallen in one of the mountain’s higher passes.

“When I first met Jim, who by this point was well into his 80s, he told me that he decided to keep the garden going as a memorial to his son. Over the past few years, I went back to the visit Jim and document the garden as it passed through the seasons. Despite his age, Jim would bound around the garden, occasionally stopping the provide a lengthy anecdote about a particular fern or tree. Last summer, Jim passed away at the age of 84.” – Robbie Lawrence

In ‘A Voice Above The Lynn’ Lawrence collaborated with the renowned poet John Burnside, who contributed four beautiful new poems to segment its chapters.

‘Drawing inspiration from the Dutch Masters, Robbie Lawrence’s images strikingly juxtapose light and shade. His photographs feature vibrant blocks of colour, which instantly steal your gaze. Throughout his career, Robbie has worked for an impressive range of clients, from the Wall Street Journal Magazine to The New York Times and the U.N, each one drawn to his ability to tell a compelling photographic story.’ It’s Nice That

‘Robbie Lawrence is acutely attentive to the way images tell a story. Working with a painterly softness and sensitivity to his subjects, the Scottish photographer deals in detail and nuance. From portraiture, travel and documentary to editorial work, he places the human experience front and centre to create thoughtful, abstract images, with an emphasis on narrative.’ Webber Represents

John Burnside (b. 1955) is the author of fourteen collections of poetry and eleven works of fiction, as well as three uncompromising memoirs. He has achieved wide critical acclaim, winning the Whitbread Poetry Award in 2000 for The Asylum Dance which was also shortlisted for the Forward and T. S. Eliot prizes, and winning the 2011 T. S. Eliot Prize for Black Cat Bone. In 2015 he was a judge for the Man Booker Prize. Born in Scotland, he moved away in 1965, returning to in 1995. In the intervening period, he worked as a factory hand, a labourer, a gardener and, for ten years, as a computer systems designer. He is a professor of English Literature at the University of St Andrews and divides his time between Fife and Berlin.