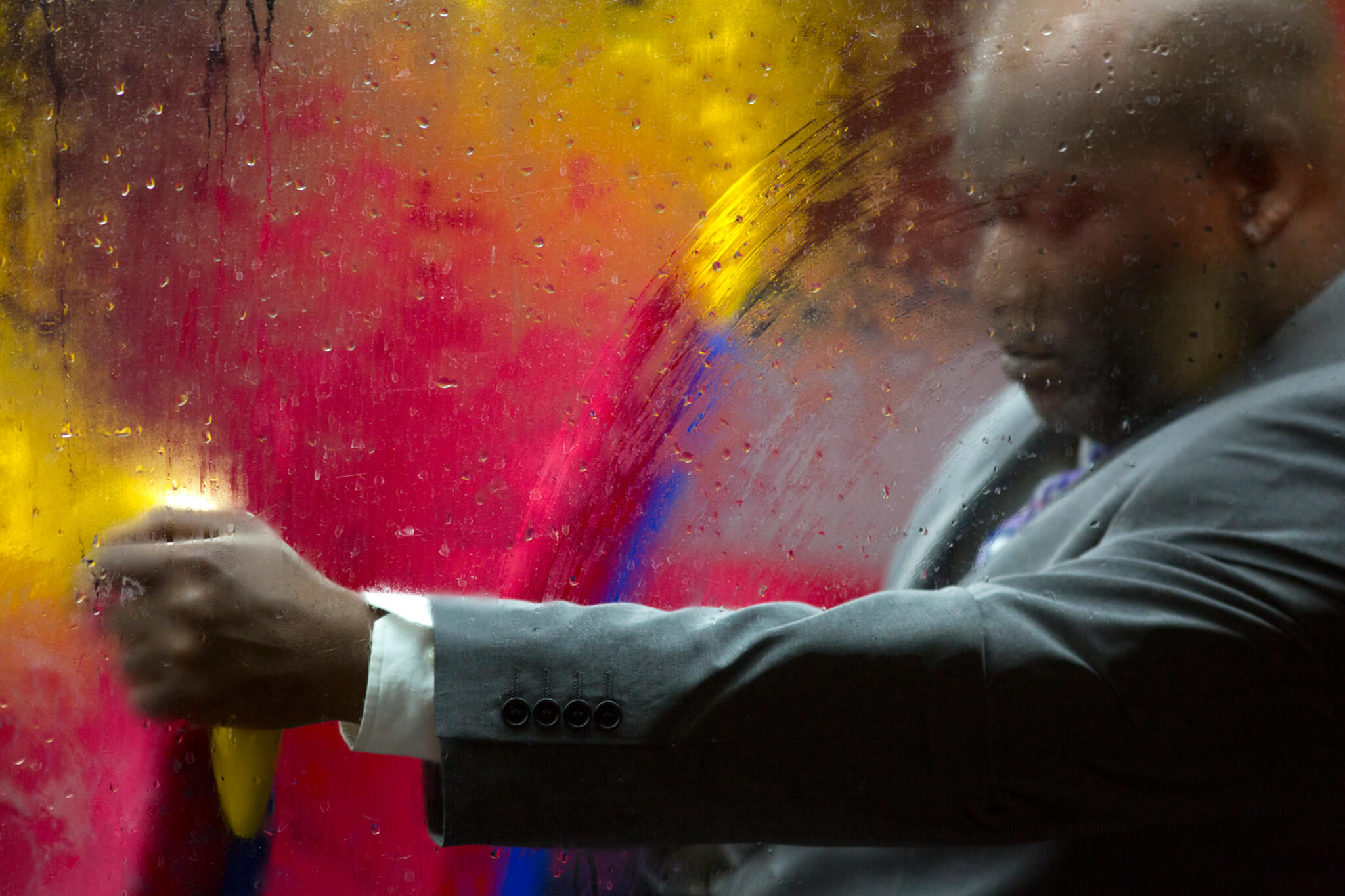 Nick Turpin, from Through a Glass Darkly

As the Museum of London prepares to launch its major exhibition London Nights, exploring the city after dark through both contemporary and historic imagery, we sat down with curator Anna Sparham to talk about her experience and what visitors can expect. London Nights will present photography ranging from the late 19th century to the present day, and will include at least 200 photographs and film and will be an immersive, atmospheric space giving a real sense of the transition of night time in one of the biggest metropolises in the world. Work from around 50 photographers will be on display, from the recognised Bill Brandt, Alvin Langdon Coburn and Rut Blees Luxemburg, to many established, emerging and lesser known artists. The diverse exhibition will showcase images drawn from the Museum of London’s own extensive photography collection, as well as many significant loans from other collections and active photographers.

Presented in three parts London Nights looks like it will encompass just about every fear and delight associated with the city after dark; what was the impetus for staging such a wide-ranging exhibition?

A few years back we staged a successful exhibition London Street Photography and have wanted to programme a photography exhibition of the same scale for a while. The variety within our photographic collections, together with a range of works I had familiarised with over recent years, made clear that this subject had enormous scope. Recognising that no exhibition on the night could ever cover all aspects, we did want to aim to do the subject justice. One angle always raises and prompts another. There are images in the collection that embrace the aesthetic charms of the city after dark for sure. But it is equally important to acknowledge the darker aspects associated with the urban environment at night and the notion of a 24 hour city – those working at night for example. The museum will relocate to West Smithfield in a few years, and the market there reminds us of this frequently. As a museum we aim to convey multiple angles to a subject and so for me this was always going to be a broad exploration. I didn’t want us to shy away from the fears. The duality in interpretation for many of the images prompts that.

Were there any surprises or truly shocking images that you felt had to – or could not be – represented in the exhibition?

In a subject as broad and potentially emotive as this, there are images you may encounter that are not straight forward – not easy to look at. I had dealt a little with this in a previous smaller exhibition on subcultures and so I knew I could expect to include or be challenged at least, but I also didn’t want to sugar coat the night and play it entirely safe. Just like the night it can be a challenging arena to find yourself in sometimes so the imagery needs to reflect that on occasion. So yes we do tackle themes such as safety and vulnerability, be it real or imaginary. Alexis Hunter’s work around a sexual assault is the most provocative and difficult in the show for audiences, but one I felt so importantly represented threat, lodged in the context of feminist art in the late 1970s. I think there are a select number of images conceived around sensitive issues, but are not overtly shocking to look at – they are suggestive. 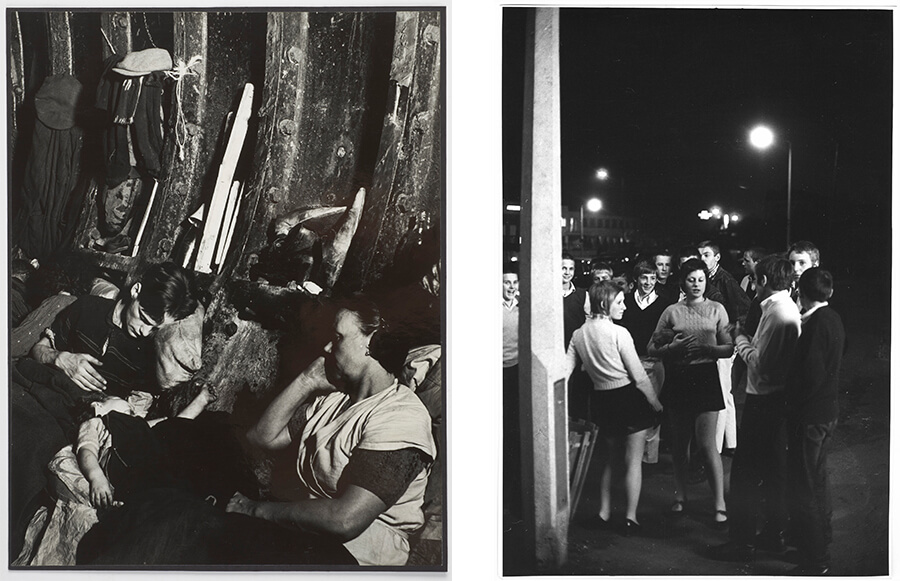 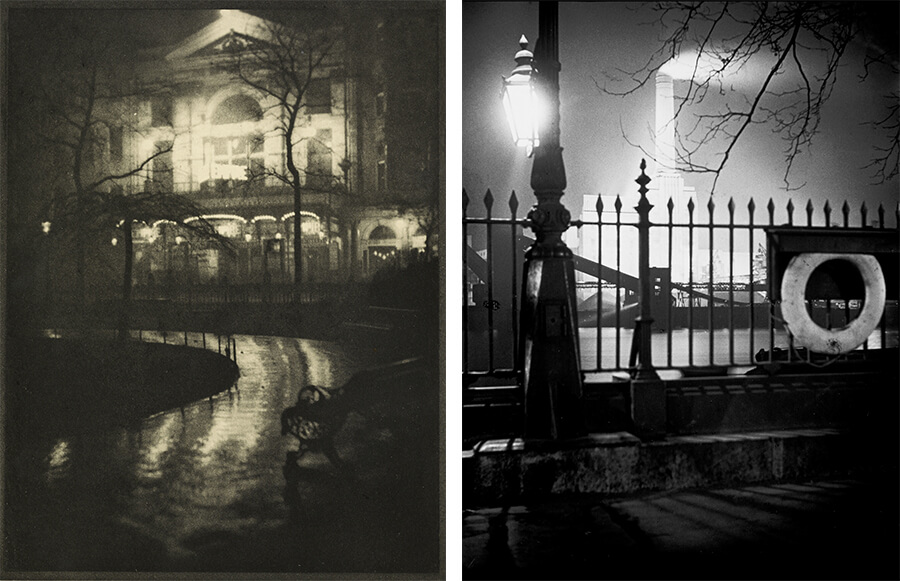 Impressionistic photogravure of Leicester Square showing the Empire Theatre by the American photographer Alvin Langon Coburn. Coburn published ‘London in 1909’, a selection of his views of the capital, printed in photogravure; Glass lantern slide of the Embankment at Chelsea, photographed at night, made by Mercie Lack.

With such a vast number of photographs to trawl through, there must have been one or two spots in the city that were clearly associated with certain activities; what examples of these can visitors expect?

Of course one of the first general visions that might spring to mind when thinking about London at night is the West End – the bright lights. There are wonderful images of accepted beauty or marvel, classic monochrome images around Piccadilly for example from Felix Mann through to the vibrant colour of tourist postcards by John Hinde. There are also locations such as Soho that by past association reflect a seedier side of the night. Or clubbing in Shoreditch. But one great intention from the beginning of conceiving the exhibition was to explore the night across the breadth of the city, so from the unrecognisable corners to the familiar yet perhaps less remarkable suburban streets. Alongside the floodlit landmarks of central London then, are also images of activity, or lack of, in far reaching aspects of the capital. Niall McDiarmid’s views in south west London for example or even ground beneath the M25 in images by Tim Bowditch and Nick Rochowski. Visitors are not going to find endless examples of the range of pastimes one might enjoy at night. This isn’t an editorial listings of whacky activities and club nights, although some of these are incorporated too. Instead it is about trying to portray the visual potential that the city at night offers, the emotional engagement and reactions to the night people have and acknowledging the varied movements of Londoners after hours – from those actually heading to work, to those resting at home.

From Alvin Langdon Coburn to Nick Turpin, we can see the city and the medium of photography evolve in the darkness. What have been the highlights for you as a curator of photography working on a project like this?

It has been fantastic to bring so many works together in one space to explore the subject so playfully. Lenders have been very generous in their time and in my selections. It is a real privilege to work with so many incredible gems and often less seen photographs. But I guess I really do get a thrill from seeing contemporary and historic works together and being able to make some wonderful connections there. For example Nick Turpin’s night bus series shot in Elephant and Castle recently juxtaposed with another photograph of people on a bus at night in Elephant by Bert Hardy. Getting work out of the store and on display for the first time is also a highlight. An old, heavy album made by Valentine and Sons on White City, or some unseen glass lantern slides by an amateur photographer Mercie Lack. It is also honestly the excitement of handling works as small as a glass plate or watching a large renowned work arrive through the door for installation. It is such an epic undertaking to make a group exhibition come together that there are mini joys along the way as simple as these.

One could suggest that an exhibition like this puts a face to the unconscious mind of the city itself, so having spent so much time looking at these pictures how do you see the city now?

Having looked at the way the city has been approached and interpreted through photographers with very broad practises it is impossible to look at the city the way I might have previously done. There have always been those moments, crossing the river, or the madness and buzz of somewhere, where you appreciate the significance and impact of the place. But I hugely respect the calmer areas too and the freedom you feel if you let yourself wander a little and not succumb to needing to be somewhere – a rare moment for myself. London is a wonderful visual pool filled with a wealth of history and experiences. No one individual can sum up, paint a picture, write about or photograph what London at night truly reflects and offers. It certainly isn’t as simple as active in the centre and sleepy at the edges. It is a city that transforms and morphs visually at night, and has evolved over the last century, yet retains more continuity than perhaps appears on the surface. I’m increasingly more intrigued by its possibilities.

Anna Sparham is Curator of Photographs at Museum of London

There will be a range of programmed events happening in relation to the exhibition including evening, week day and weekend workshops and events. Further information