Following her public installation The Teaser, that filled the courtyard of Somerset House during Photo London 2015, photographic artist Rut Blees Luxemburg has been commissioned by Lynch Architects and Land Securities to create a large-scale artwork for the western façade of Westminster City Hall. The large-scale sculptural piece will be situated in view of a new public space created by Lynch Architects, making it Blees Luxemburg’s first permanent public artwork.

Entitled Silver Forest, the work takes the form of a monumental concrete frieze that depicts nocturnal urban silver birch forests from Beijing to London. The 7 x 30m artwork uses a new technological process in which a photograph is cast in concrete to create a three-dimensional sculptural relief. The image of the forest is a powerful allegory for spiritual contemplation, reflection and organic renewal. In this work is seen from different perspectives and the textured surface responds subtly to the illumination of day and night, changing from grey to silver. The artwork offers an imaginary space: the city gives way to a landscape – an entry point into the imagination and its sensory potential.

Silver Forest, situated in this new public court, extends the presence of the natural world into everyday urban life, mediating between nature and culture, forming the background and fabric of the city. It will be unveiled in November 2015. 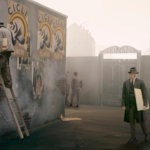 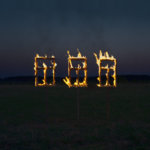