The Gift of Photography – part 1

🎁 Gift ideas from the Photo London exhibitors 🎁
Books, photographs, and more under £1000 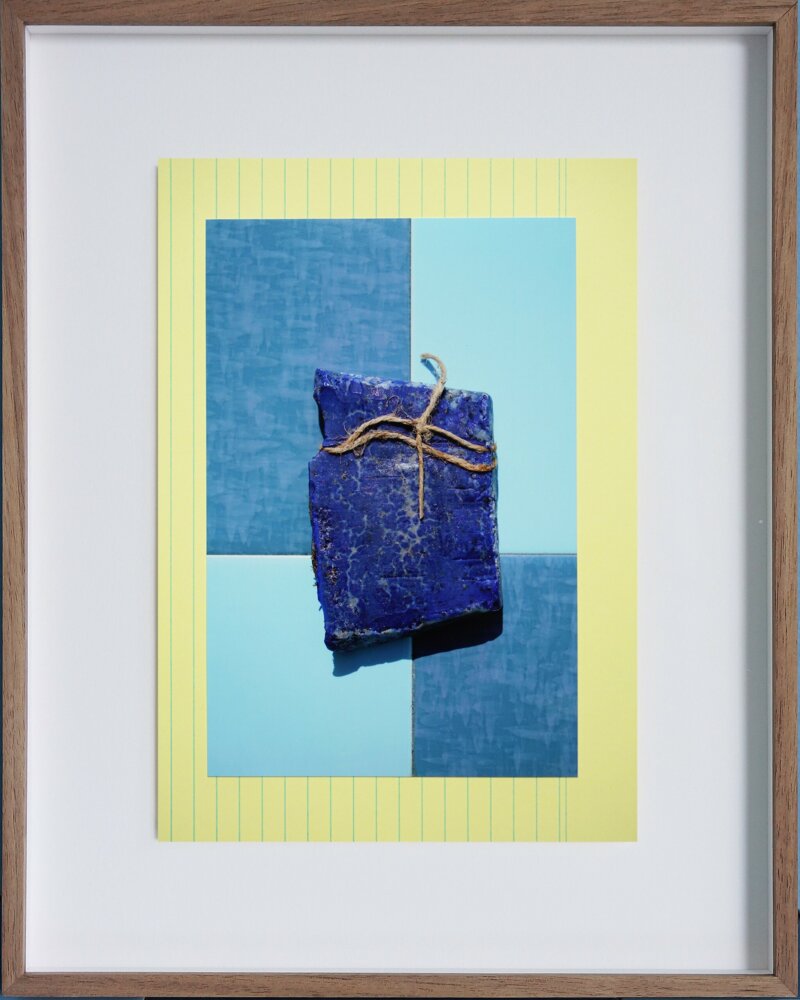 Signed, titled and dated on verso. Includes framing in a walnut frame and museum glass

“Who is unwilling to think is dismissed.” – Joseph Beuys

“I was inspired by this quote from Joseph Beuys during my confinement in Berlin. I felt it very relevant during this particular time. This series was created during the first lockdown in collaboration with the curator Diana Poole in the spring of 2020. This global crisis is challenging us. Everywhere we are forced to adapt to this unprecedented situation. I have been using this time of stillness to experiment with various new series. Some of the works in this series were directly inspired by some of the works Beuys did; the Capri battery, 1985, Das Erdtelefon, 1967, and the Fat Chair, 1963. For me, it was also a moment of pause and reflection.“ – Jessica Backhaus 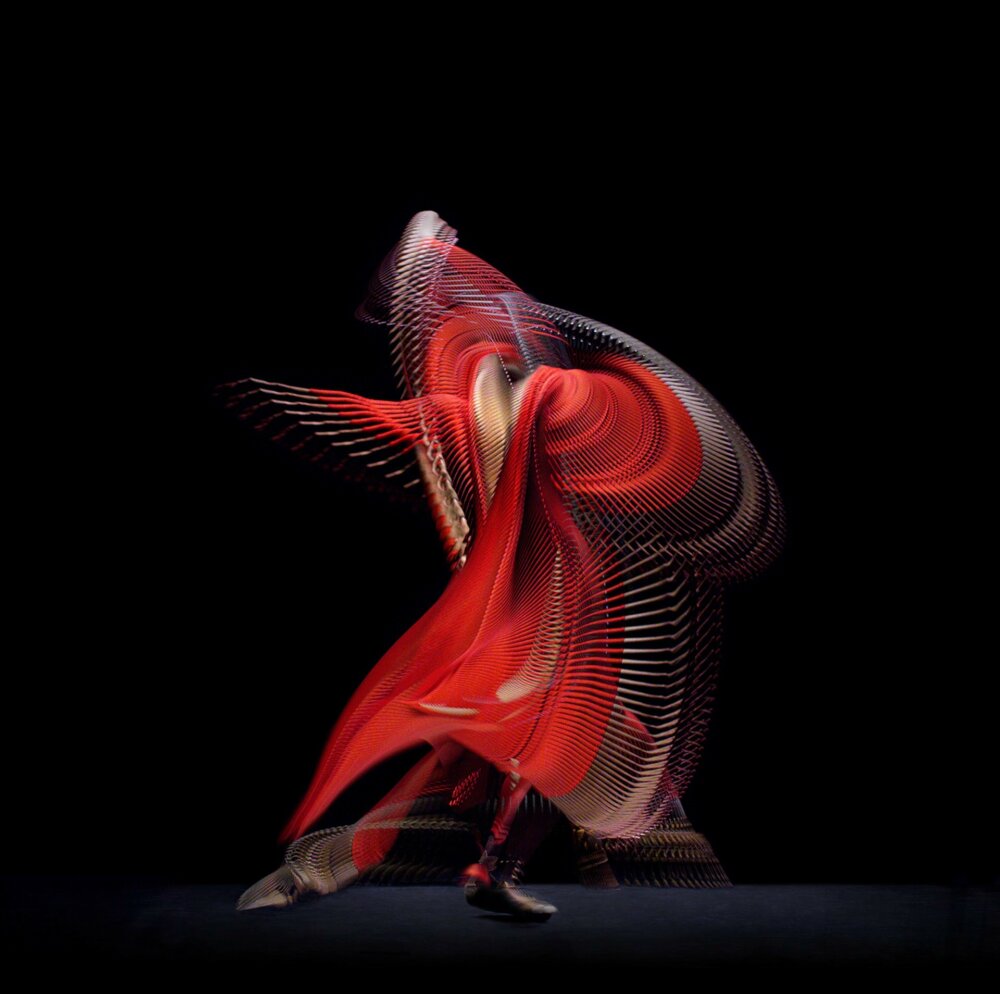 British photographer Giles Revell creates imagery that is driven by analytical and forensic ideas that question the boundaries of science and art. There is a distilled graphic style to his work and he is inspired by the potential of using new technologies to reveal innovative ways of expressing ideas. This image is one of a series of abstract dance images made in collaboration with The Royal Ballet, exploring both the sculptural and emotional movement of classical dance in a bold contemporary way. Choreographed Royal Ballet dancers were captured with precision at very high speed to emphasize the energy, gesture, and expression through time-lapse. The work was produced to celebrate the relaunch of The Royal Opera House and The Linbury Theatre after large-scale renovations and is o permanent display there. 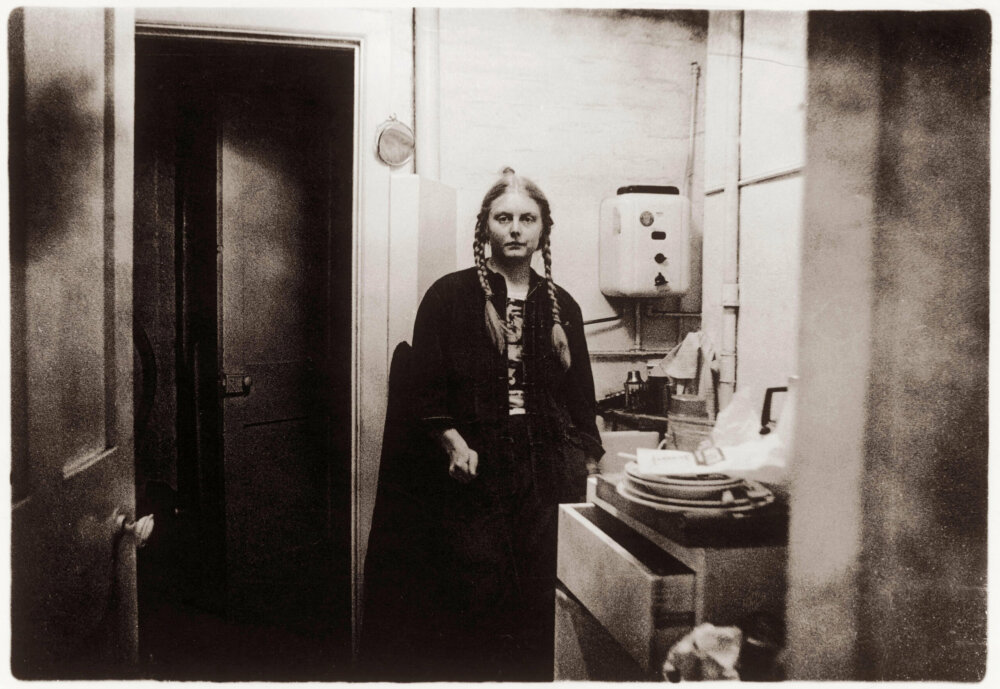 The experimental practice of the artist and photographer Sue Barnes encompassed drawing, photography, graphic design, printmaking and typography. Barnes studied at the Royal College of Arts in the late 1970s, and her early works explored feminist themes about self-identity, family, and ‘the home’. Barnes’ domestic environment and her own ‘self’ were major concerns and themes in her practice at that period. She worked in photographic series and documented the private performances she made in her South London flat. In the 1970s and 1980s, she made numerous photographic ‘home’ self-portraits, together with a series of images that incorporated photo-montaged objects from her home environment, including washing machines, irons, and refrigerators. 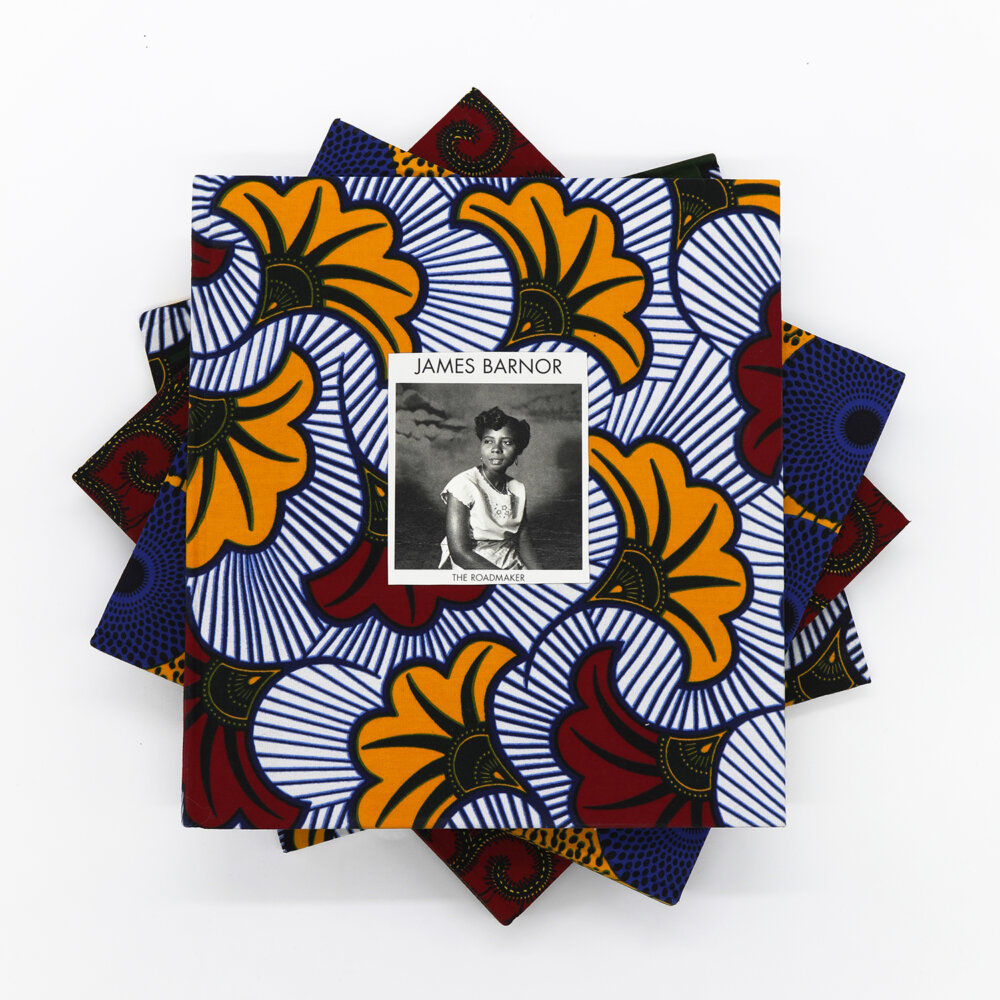 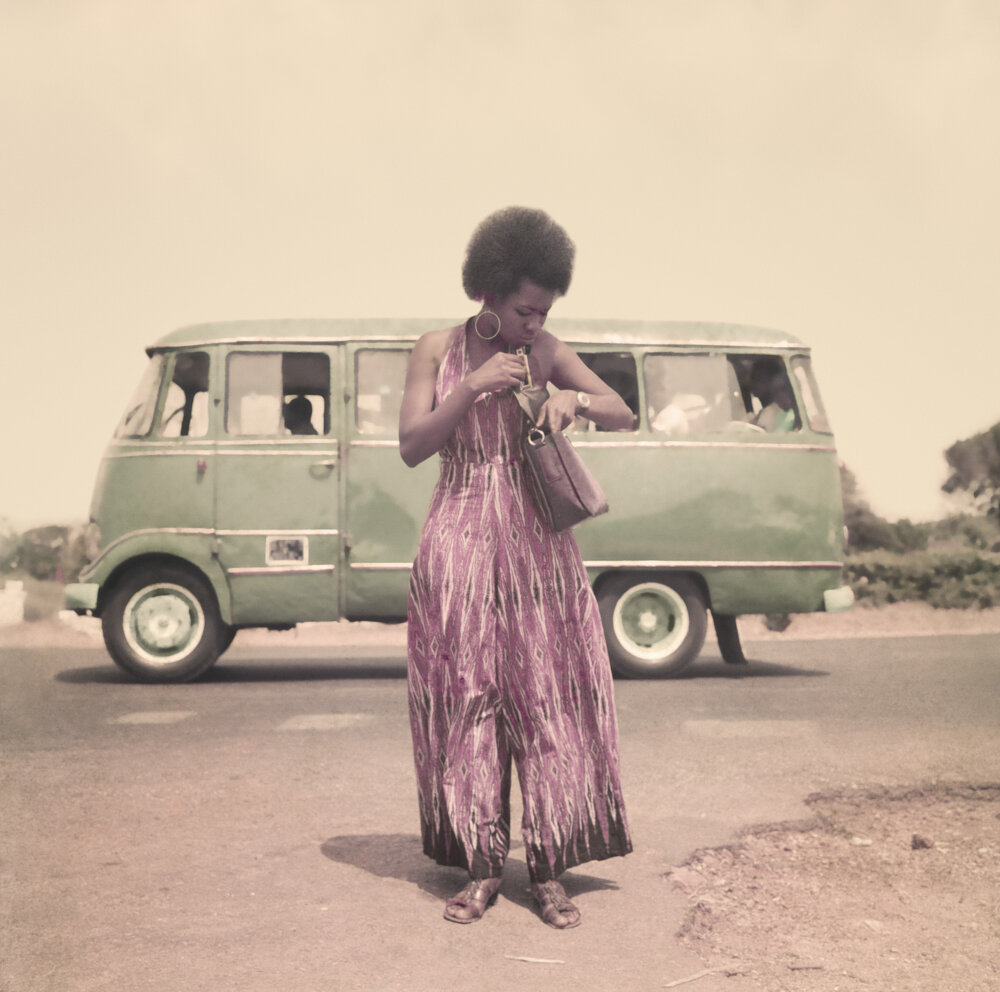 « In 1961, two years after James Barnor’s move to Britain, the Ghanaian playwright Efua Sutherland and the American photographer Willis E. Bell published ‘The Roadmakers’. The book blended text and images to paint a poetic, sensitive and hopeful portrait of a newly independent Ghana. The imaginary of the road running through this book seems to me to be wonderfully suited to James Barnor, to his personal trajectory as well as to his photographic career woven in a singular way between Africa and Europe, between the past and the future of a profession, between individuals belonging to different worlds.» – Damarice Amao 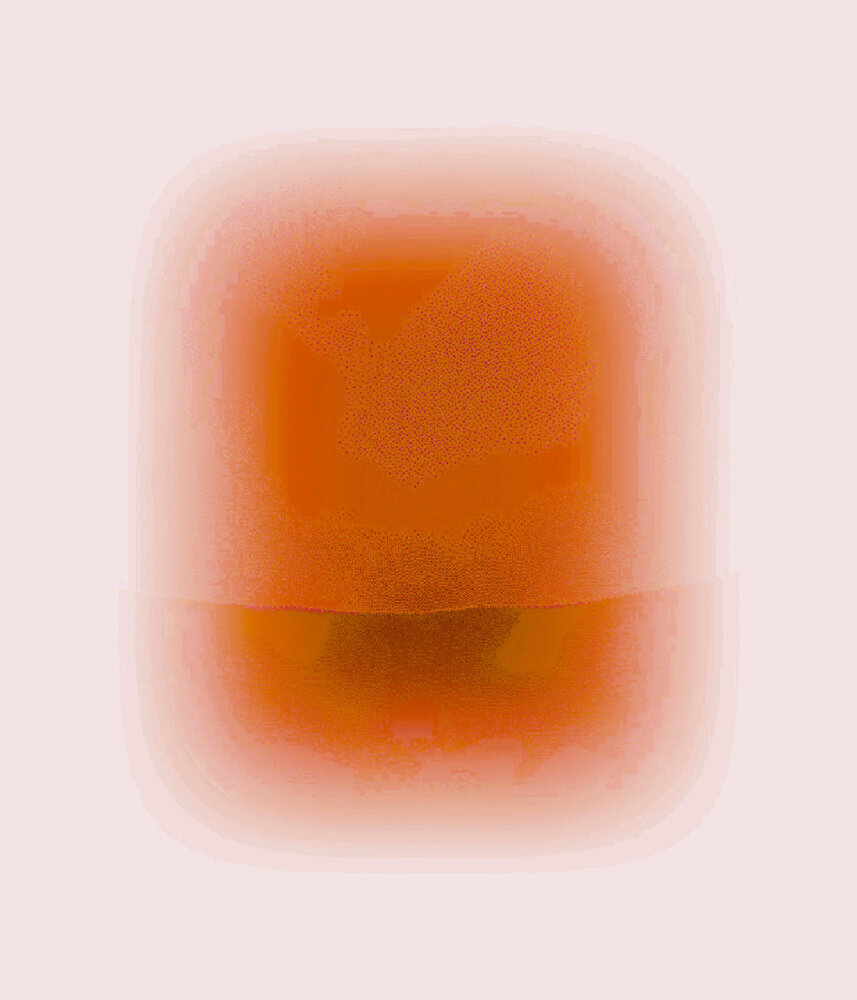 Christine Wilkinson is described as an abstract photographer who utilises digital techniques to produce her mesmerizing studies of light and colour. Her work blurs the boundaries between photography and painting.

Christine says of her work: ‘The best way to describe my process is that I start with an image of light on which I make marks. Each of these marks enables me to control shape, tone, contrast and luminosity, almost like a form of drawing, creating exciting possibilities.”

It is important to point out that Christine’s work only employs the tools in photoshop that would be available to her in an analogue darkroom. 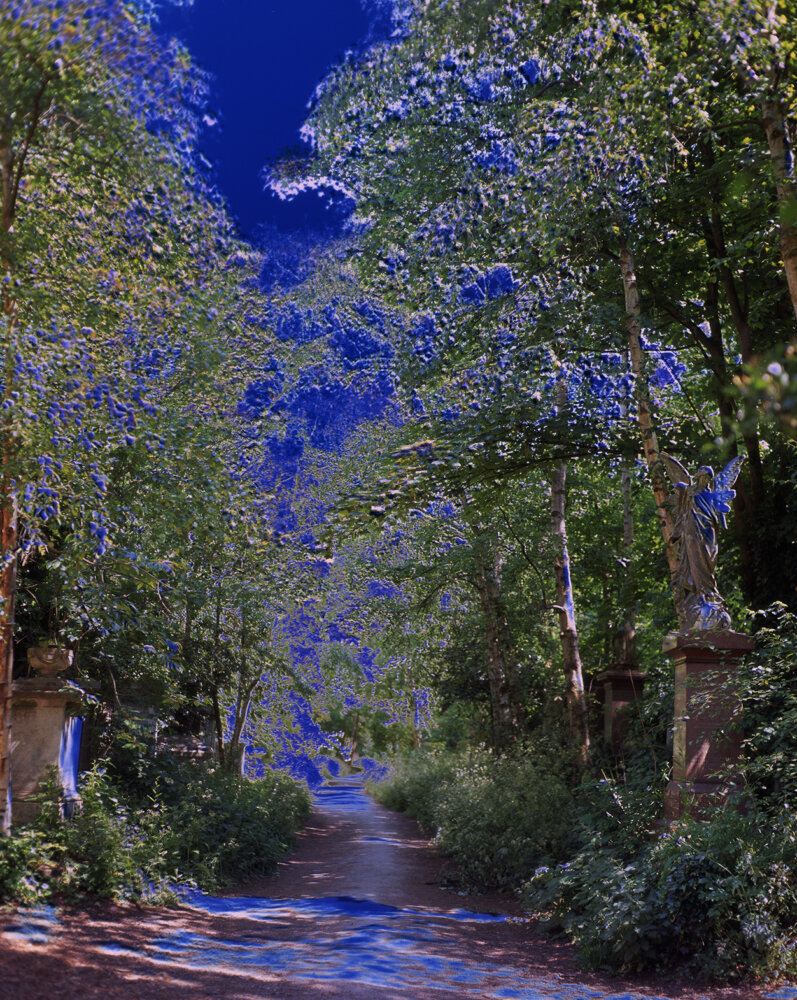 Catherine Yass made this striking new work during lock-down in the gothic-romantic landscape of London’s Abney Park Cemetery. Her distinctive use of the colour blue and use of light capture a dreamlike moment; a time suspended between past and future, the immediacy of now. 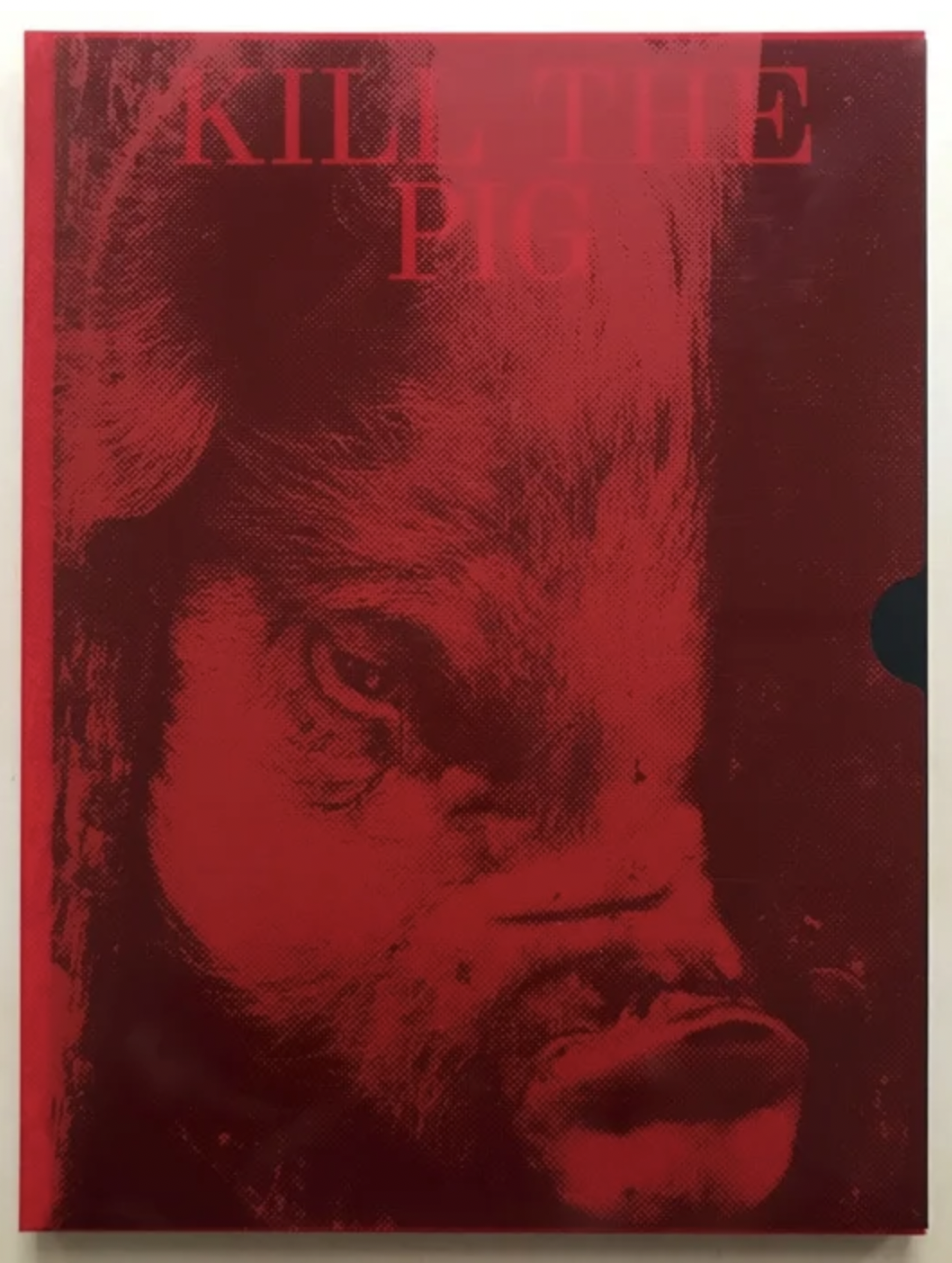 Published by IBASHO & the (M)édition

In 1961 Masahisa Fukase’s first solo exhibition ‘Kill the Pig’ was held in Tokyo. The exhibition consisted of two series of photographs: one titled ‘Kill the Pig’ and another series titled ‘Naked’. The series ‘Kill the Pig’ featured photographs set in a slaughterhouse in Shibaura, Tokyo. The other series exhibited was ‘Naked’, showing Fukase himself and his partner at the time, Yukiyo Kawakami, in various poses. It seems that Fukase attempted to express something about the cruelty of the two poles of life: as a positive and a negative. In other words, the idea that death is an essential part of life, and life of death.

This book comprises photographs that featured in that exhibition, now assembled as a single volume. With this book and Tomo Kosuga’s essay, light is cast on the works in the exhibition, which Kosuga considers representing Fukase’s starting point in his photographic practice, and which for many decades languished in the shadows. 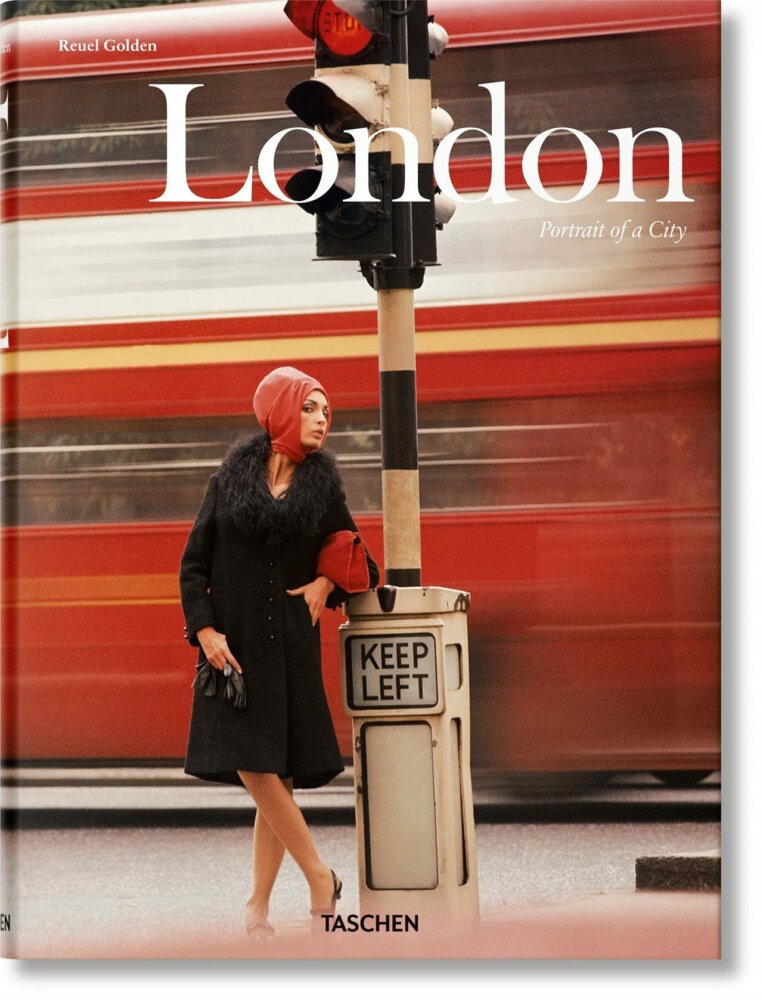 London: Portrait of a City

A photographic journey through the history of this epic city Samuel Johnson famously said that: “When a man is tired of London, he is tired of life.” London’s remarkable history, architecture, landmarks, streets, style, cool, swagger, and stalwart residents are pictured in hundreds of compelling photographs sourced from a wide array of archives around the world. London is a vast sprawling metropolis, constantly evolving and growing, yet throughout its complex past and shifting present, the humor, unique character, and bulldog spirit of the people have stayed constant. This book salutes all those Londoners, their city, and its history. In addition to the wealth of images included in this book, many previously unpublished, London’s history is told through hundreds of quotations, lively essays, and references from key movies, books, and records. From Victorian London to the Swinging 60s; from the Battle of Britain to Punk; from the Festival of Britain to the 2012 Olympics; from the foggy cobbled streets to the architectural masterpieces of the millennium; from rough pubs to private drinking ♣ from Royal Weddings to raves, from the charm of the East End to the wonders of the Westminster; from Chelsea girls to Hoxton hipsters; from the power to glory: in page after page of stunning photographs, reproduced big and bold like the city itself, London, at last, gets the photographic tribute it deserves. Photographs by: Slim Aarons, Eve Arnold, David Bailey, Cecil Beaton, Bill Brandt, Alvin Langdon Coburn, Anton Corbijn, Terence Donovan, Roger Fenton, Bert Hardy, Evelyn Hofer, Frank Horvat, Tony Ray-Jones, Nadav Kander, Roger Mayne, Linda McCartney, Don McCullin, Norman Parkinson, Martin Parr, Rankin, Lord Snowdon, William Henry Fox Talbot, Juergen Teller, Mario Testino, Wolfgang Tillmans, and many, many others. 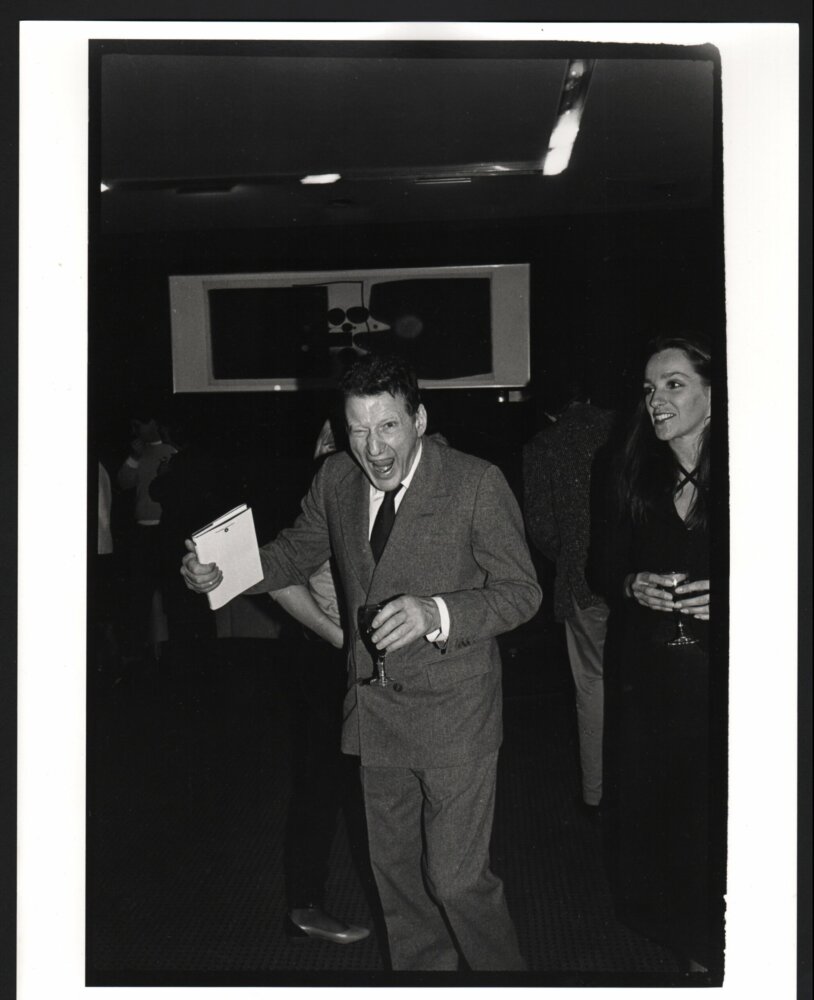 Lucian Freud at Lord Antony Lambton’s book party. London. 19 September 1983. From the edition of 6. Signed and stamped on verso. Only available print in this size. 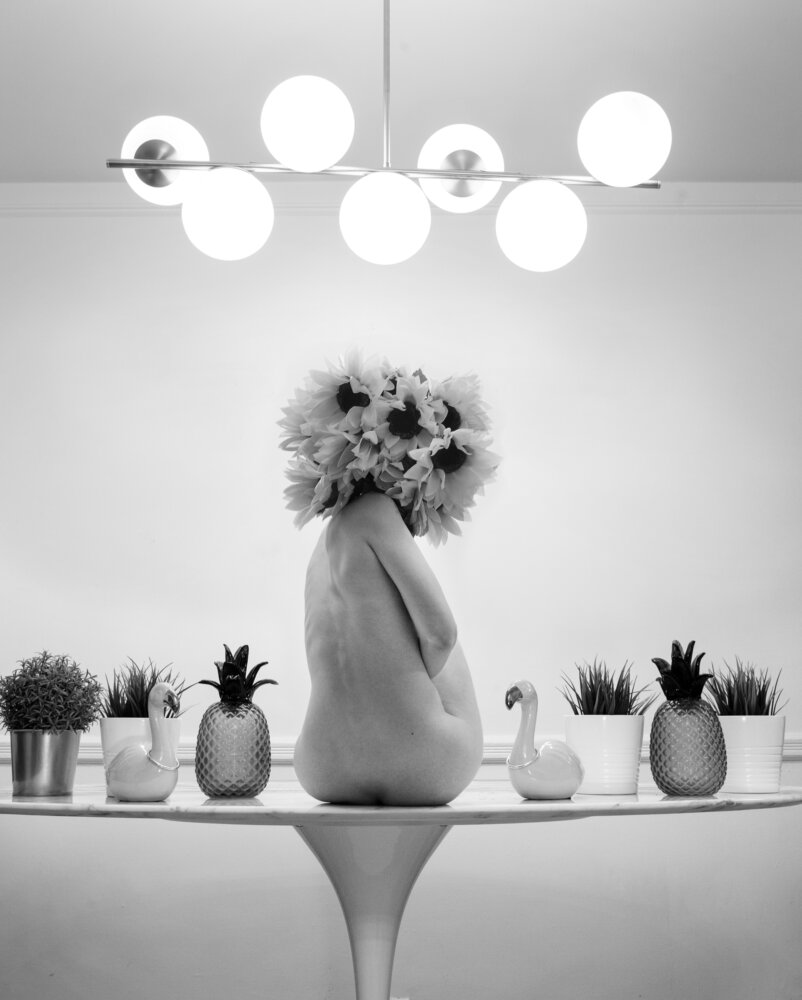 Loreal Prystaj (b. 1990, New York, USA) is a visual artist based in London. Her work presently focuses on the subconscious and inherited psyche, particularly traumas from normative gender roles existing in the domestic sphere. She expresses these ideas through photography, installation, and sculptural interpretation. Prystaj constantly questions women’s new found liberation, looking at what is fed to us culturally versus what is felt internally, attempting to disrupt patterns of taught gender performance. In fact, by performing as or ‘playing’ in cultural motifs – narratively or decoratively – Prystaj transforms once familiar spaces into mise en scène that highlight the connection between the physical environment and the internal states past and present. 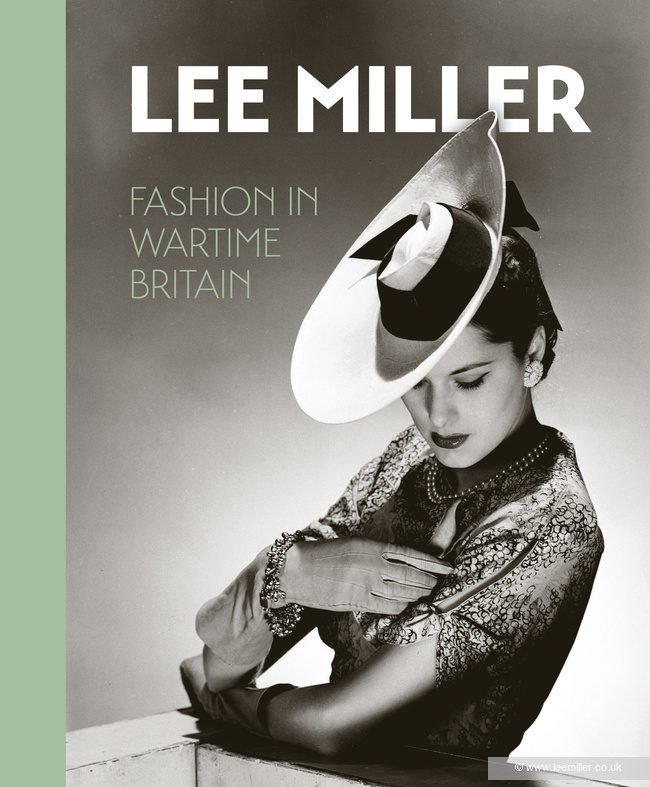 The accompanying catalogue of the 63-print exhibition of Lee’s wartime fashion photography in Britain. Shown for the first time in 2021, at the Lee Miller Gallery, Farleys House, East Sussex.

Many know Lee Miller’s name in connection to her inspirational World War 2 reportage. Few are aware of the volume of her British fashion images that were published in British Vogue from 1939 to 1944. This beautiful book addresses Lee Miller’s contribution to the fashion industry during wartime and her significant service to the survival of British Vogue magazine. ‘She [Lee Miller] has borne the whole weight of our studio production through the most difficult period in Brogue’s [British Vogue’s] history’ British Vogue’s editor Audrey Withers, 1941.

Containing over 130 images with accompanying text by Lee Miller’s granddaughter Ami Bouhassane, Co-Director of the Lee Miller Archives. Two additional essays by fashion historian Amber Butchart and contributing editor to British Vogue, Robin Muir. (The exhibition and accompanying book were made with the support of Arts Council England funding from the DCMS.)