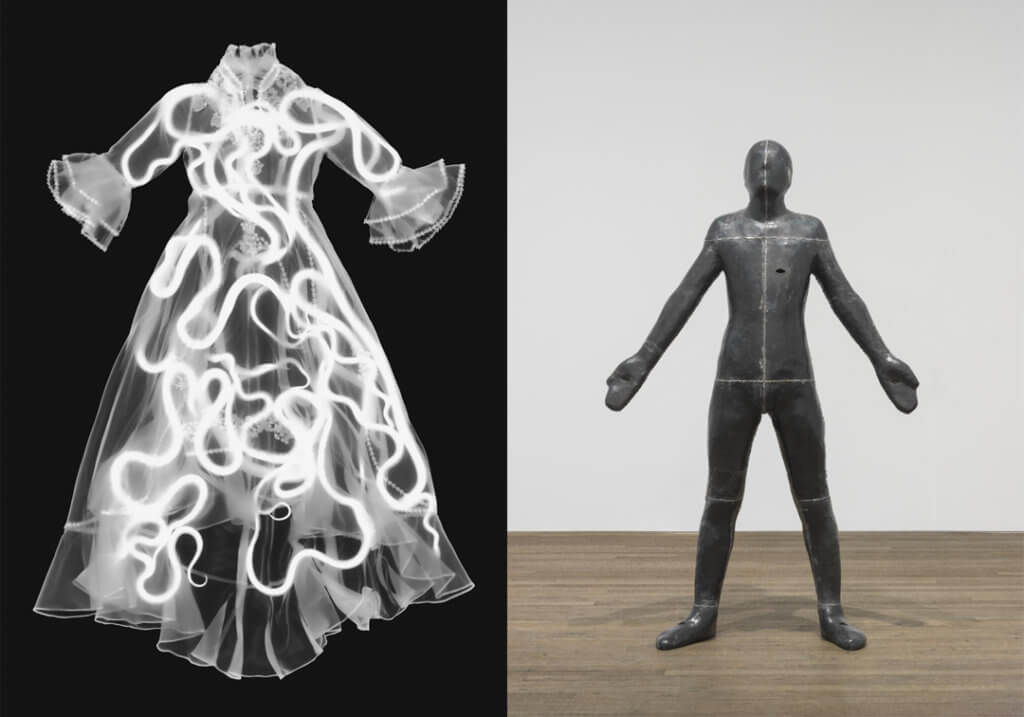 Images, from left to right: Adam Fuss, Medusa, from the series Home and the World, 2010; Antony Gormley, Untitled (for Francis) 1985

Adam Fuss is a contemporary British photographer. Known for his ethereal images created using a photogram technique in which objects are placed directly on a light-sensitive painter, Fuss achieves a poetic sense of detachment and wonder throughout his work. “I would much prefer people looked at my photographs as if they were paintings,” he once said. “Because when we look at paintings we look only at the image; we experience it. Somehow when people look at photographs they want an answer to a question that they feel can be answered through technical information.” He was born in 1961 in London, England but grew up mostly in Australia, and in 1980 he began working as a photographic apprentice at the Ogilvy & Mather Agency. Two years later, he moved to New York and began experimenting with a pinhole camera. By 1985, he was showing these works at Massimo Audiello’s gallery where they were met with critical acclaim. In 2000, he was awarded the 16th Annual Award for Art from the International Center of Photography, and he has shown at the Museum of Fine Arts in Boston, the Metropolitan Museum of Art in New York, the FotoMuseum in Winterthur, and the National Gallery of Victoria in Melbourne. He lives and works in New York, NY.

Antony Gormley is widely acclaimed for his sculptures, installations and public artworks that investigate the relationship of the human body to space. His work has developed the potential opened up by sculpture since the 1960s through a critical engagement with both his own body and those of others in a way that confronts fundamental questions of where human beings stand in relation to nature and the cosmos. Gormley continually tries to identify the space of art as a place of becoming in which new behaviours, thoughts and feelings can arise. Gormley’s work has been widely exhibited throughout the UK and internationally with exhibitions at the Royal Academy of Arts, London (2019); Delos, Greece (2019); Uffizi Gallery, Florence (2019); Philadelphia Museum of Art, Philadelphia (2019); Long Museum, Shanghai (2017); National Portrait Gallery, London (2016); Forte di Belvedere, Florence (2015); Zentrum Paul Klee, Bern (2014); Centro Cultural Banco do Brasil, São Paulo, Rio de Janeiro and Brasilia (2012); Deichtorhallen, Hamburg (2012); The State Hermitage Museum, St Petersburg (2011); Kunsthaus Bregenz, Austria (2010); Hayward Gallery, London (2007); Malmö Konsthall, Sweden (1993) and Louisiana Museum of Modern Art, Humlebæk, Denmark (1989). Permanent public works include the ‘Angel of the North’ (Gateshead, England), ‘Another Place’ (Crosby Beach, England), ‘Inside Australia’ (Lake Ballard, Western Australia), ‘Exposure’ (Lelystad, The Netherlands) and ‘Chord’ (MIT – Massachusetts Institute of Technology, Cambridge, MA, USA). Gormley was awarded the Turner Prize in 1994, the South Bank Prize for Visual Art in 1999, the Bernhard Heiliger Award for Sculpture in 2007, the Obayashi Prize in 2012 and the Praemium Imperiale in 2013. In 1997 he was made an Officer of the British Empire (OBE) and was made a knight in the New Year’s Honours list in 2014. He is an Honorary Fellow of the Royal Institute of British Architects, an Honorary Doctor of the University of Cambridge and a Fellow of Trinity and Jesus Colleges, Cambridge. Gormley has been a Royal Academician since 2003. Antony Gormley was born in London in 1950.