Back to the Future: The Avant-Garde Is an Address 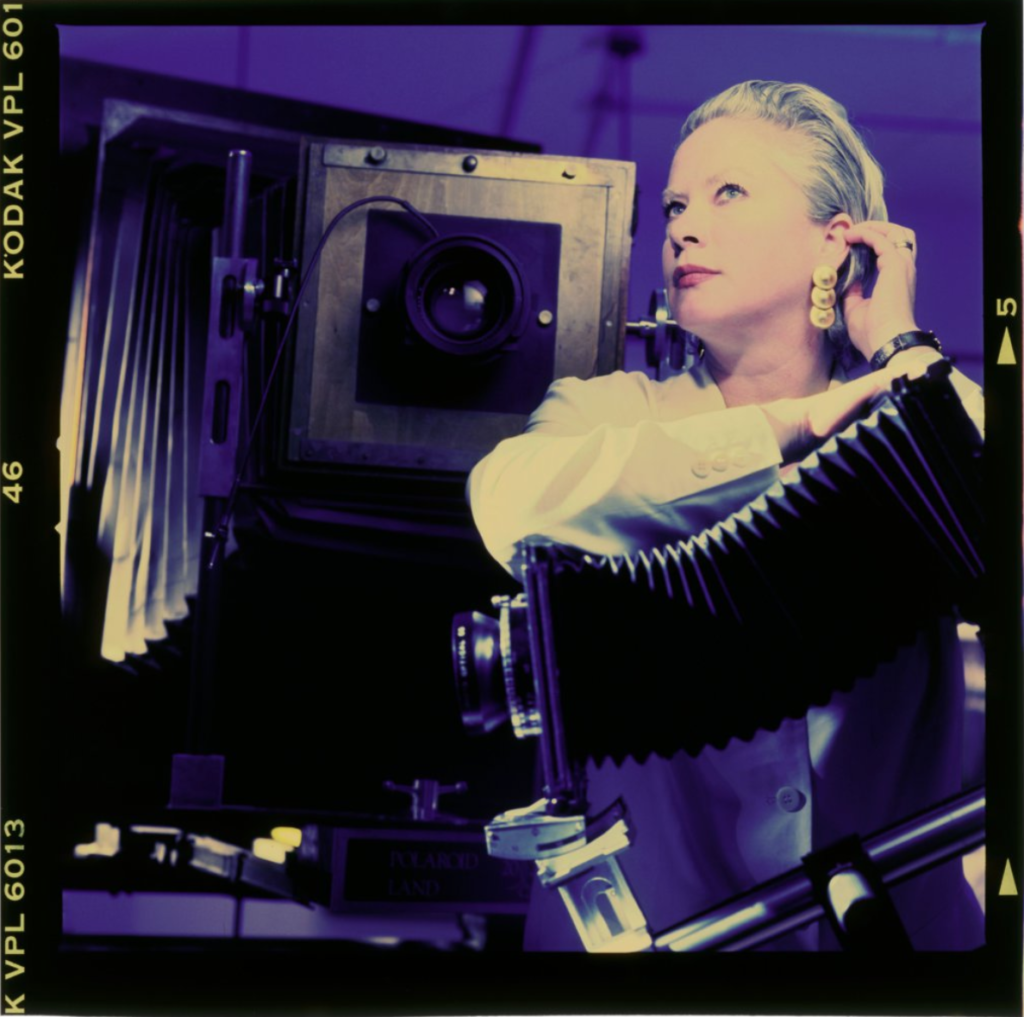 In this Lecture for the Royal Photographic Society, Ellen Carey contextualises photography as visual art and game-changer at the forefront of the avant-garde.

In 1983, The Polaroid Artists Support Program invited Carey to work at the Polaroid 20 X 24 Studio. Her Neo-Geo, post-psychedelic Self-Portraits (1984-88) were created, followed by her stacked photo-installations Abstractions (1988-95). Her pioneering breakthrough in Polaroid sees her Pull (1996) followed by her Rollback (1997) naming her Polaroid practice Photography Degree Zero (1996-2018). She investigates minimal and abstract images with Polaroid’s instant technology partnered with her innovative concepts, often using only light, photography’s indexical, or none, emphasizing zero. Her photogram work is darkroom-based and camera-less; it parallels her Polaroid less-is-more aesthetic under her umbrella concept Struck by Light (1992-2018). When Carey works in the color darkroom, no light is allowed except upon exposure. Carey has worked in a variety of cameras and formats: Polaroid SX-70 and Polaroid PN film; black/white to colour; 35mm, medium, and large format. Her experimental images see a range of genres and themes; they are one-of-a-kind. Underscored by concepts around light, photography’s indexical and properties specific to the medium – silhouette; shadow; negative – in colour, Carey often uses RGBYMC, photographic colour theory, as a point-of-departure in palette, adding context and content, citing the history of colour photography, especially the work of Anna Atkins, the first women photographer, the first in colour.

Site-specific monumental installations in Polaroid include Mourning Wall of 100 grey negatives at Real Art Ways (2000), also exhibited in Part-Picture (2015) at The Museum of Canadian Contemporary Art (MoCCA); Self-Portrait @ 48 at Connecticut Commission for the Arts (2001); the gigantic Pulls XL that used the Polaroid 40 X 80 camera (shortly dismantled, never re-assembled) for her MATRIX #153 exhibit (2004-05) at The Wadsworth Atheneum Museum of Art (www.wadsworthatheneum.org) in their prestigious MATRIX program. Dings & Shadows are often huge colour photogram installations, one seen at The Benton Museum of Art, another at Florida Atlantic University (FAU). Caesura (2016) is a photogram that introduces visual breaks in colour; caesura is Greek or Latin for pause: in word (poetry) or sound (music). Her images use colour theory — RGBYMC — as palette and conceptual point-of-departure, using light, photography’s indexical, as it — blends, bends, breaks — across the paper. What remains are vertical bands, dividing the rectangle in half, white is the break or pause, in the composition; its “ caesura” or cut, dramatic black signals too much light, colours overlap as well. Zerogram re-names the traditional photo-gram; many published in her first artist’s book “Mirrors of Chance: The Photograms of Ellen Carey”.

Photography Degree Zero (1996-2018) names her large-format Polaroid 20 X 24 lens-based art, which she began using in 1983 under the Polaroid Artist Support Program. Struck by Light (1992-2018) finds her parallel practice in the darkroom with the camera-less photogram, a process from the dawn of the medium, discovered in the 19th century by William Henry Fox Talbot, both photogram and the phrase drawing with light continue today. Her experimental investigations into abstraction and minimalism, partnered with her innovative concepts and iconoclastic art-making, often use bold colours to create new forms. Colour and light is the link between her two practices; light, photography’s indexical, is used a lot or a little or none at all; its absence or zero.

Pictus & Writ (2008-2018) finds the artist’s tradition of writing on other artists. Sol LeWitt: A Wall Drawing Retrospective at MASS MoCA, with Yale University Press, published the book Sol LeWitt:100 Views with 100 new essays; Color Me Real is Ellen Carey’s contribution. Her Man Ray essay on her discovery of his “hidden” signature in his black and white photograph (1935) titled Space Writings (Self-Portrait) sees an edited version At Play with Man Ray published in Aperture. On her own work In Hamlet’s Shadow, published in The Polaroid Years: Instant Photography and Experimentation exhibit/book/tour (2012-13); Mary-Kay Lombino, Curator, Lehman Loeb Art Center, Vassar College.